Posted on February 3, 2012 by Simon Richardson 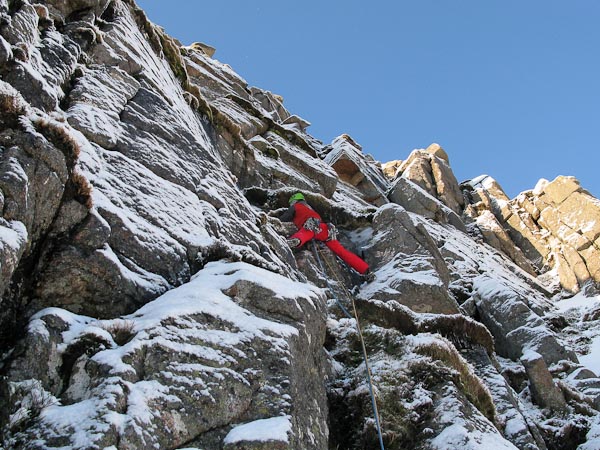 Sylvain Baboud on first ascent of Arch Rival (V,5) on Creagan Cha-no. This was the first line attempted on Arch Wall when the crag was explored last season, but the turf was not sufficiently frozen, so the more technical (and less turfy) Arch Wall (VII,7) was climbed instead. Arch Rival takes the hanging groove left of the rock fall scar in the upper centre of the photo. It was repeated by Viv Scott during the BMC Winter Meet on January 27. (Photo Simon Richardson)

Creagan Cha-no on the east flank of Cairngorm has proved very popular over the last few weeks, with several teams climbing there most days. The majority of last season’s routes have been repeated and there is overall consensus on the grades. Note that the grade of Arch Enemy was incorrectly marked on the Arch Wall Topo and has now been corrected to V,5. Chimney Rib has had quite a few ascents now, and thought to be III,4 rather than its original IV,4. The only route that I haven’t heard of being repeated is Arch Wall which was graded VII,7 in rather poor conditions last season. It may prove to be far easier with well frozen turf!

Alongside the repeats there has been some new route activity too. The diary of events below summarises everything I’m aware of since the More Activity on Creagan Cha-No post, but I’m sure there will have been other activity too. Please drop me an email if I have missed anything!

January 19: First ascent of Wile-E-Coyote (IV,4), the deep groove right of Anvil Corner (right around the arête) by Steve Crawford and Alex Parmentier. Repeated by John Lyall and another team a few days later, who confirmed the grade and said the climbing was good.

January 22: A new V,6 on the right wall of the Mainmast buttress taking the wide crack and chimney line. Neil Adams and Gwylim Lynn.  “A pleasant pitch with tech 6 moves and quite spaced gear.”

January 26: Three new routes by Sylvain Baboud from France and myself during the BMC International Meet. We climbed Arch Rival (V,5) – a counter-diagonal to Arch Wall, Boundary Ridge (III,4) – the right bounding ridge of the corrie, and Flying Rib (IV,5) – the slabby pronounced rib 50m right of Arch Wall that runs up to where easy ground of Boundary Ridge reaches the plateau.

January 27: Alternative Finish to Tower Chimney by Ross Mathers and Edvin Mellergard. An obvious line that continues straight up instead of veering right up the squeeze chimney of the original line.

One Response to Cha-no Diary