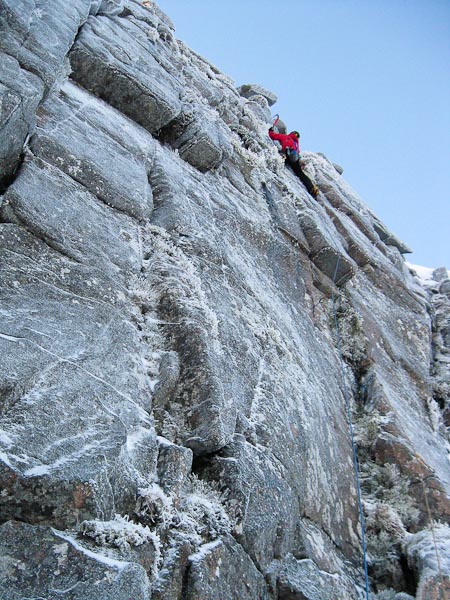 Harry Holmes pulling through the second crux section during the second ascent of Smooth as Silk (VII,7) on Creagan Cha-no. Harry was partnered by Joanna Lisowiec who was doing only her second winter route, and went on to lead Jenga Buttress (III,4) later in the day. (Photo Joanna Lisowiec)

Friday January 13 was a busy day on Creagan Cha-no.

Stuart Lade, Liam Fleming, Jill Plummer went to have a look at Jenga Buttress but ended up not walking far enough and climbed the broad ledgey buttress between Anvil Corner and Duke’s Rib. “It was one of the more wintry looking parts of the crag on the day as a lot of the line was shaded,” Stuart told me. “It was a bit of a rambling line, fairly escapable but with some tricky pulls over ledges with a fun 20m corner at the top.” Stuart reckons that Kerplunk was about Grade III and it was the first time any of them had done a new route.

Further right, Harry Holmes and  Joanna Lisowiec from Edinburgh University Mountaineering Club had a good day with an early repeat of Jenga Buttress (III,4) and the second ascent of Smooth as Silk (VII,7), which is probably the hardest route on the cliff at present.

John Lyall and Eric Pirie also climbed three new routes to the south (i.e. left of Recovery Gully). “One was on the right wall of the buttress of Cutty Sark, which was on ice and neve,” John explained. “The other two were on the next big buttress to the south of Short Ridge, and a bit better than they looked!”

The cliff is attracting an ever-increasing number of visits, so if you think climb have something new (and there is still a lot to go at), please get in touch and I will attempt to keep everybody up to date.