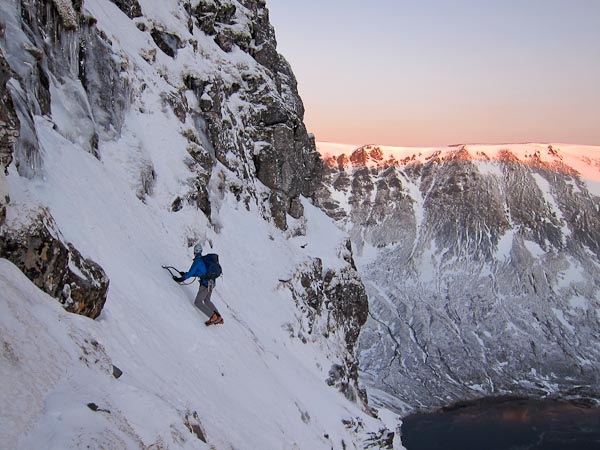 Keith Ball enjoying The Crab Crawl (IV,4) - Tom Patey’s classic girdle traverse of the Creag Meagaidh cliffs. At 2400m in length, it is one of the longest climbs in the British Isles. (Photo Tim Neill)

Collectors of Cold Climbs routes will be interested in the email I’ve just received from Tim Neill:

“Keith Ball and I thought about Ben Alder for Monday just past too! It was such a nice day, but probably the best thing to do was something more traditional than trickier/modern. We had a great day on Meagaidh doing The Crab Crawl in the end! Don’t know if it’s a route that’s so much in vogue these days, but conditions were perfect, with great neve, bomber turf, and great ice where needed to cross the bits of the Post routes on the third part. We finished with half an hour of daylight to spare!”

One Response to Crawling Round Meagaidh