Posted on December 31, 2011 by Simon Richardson 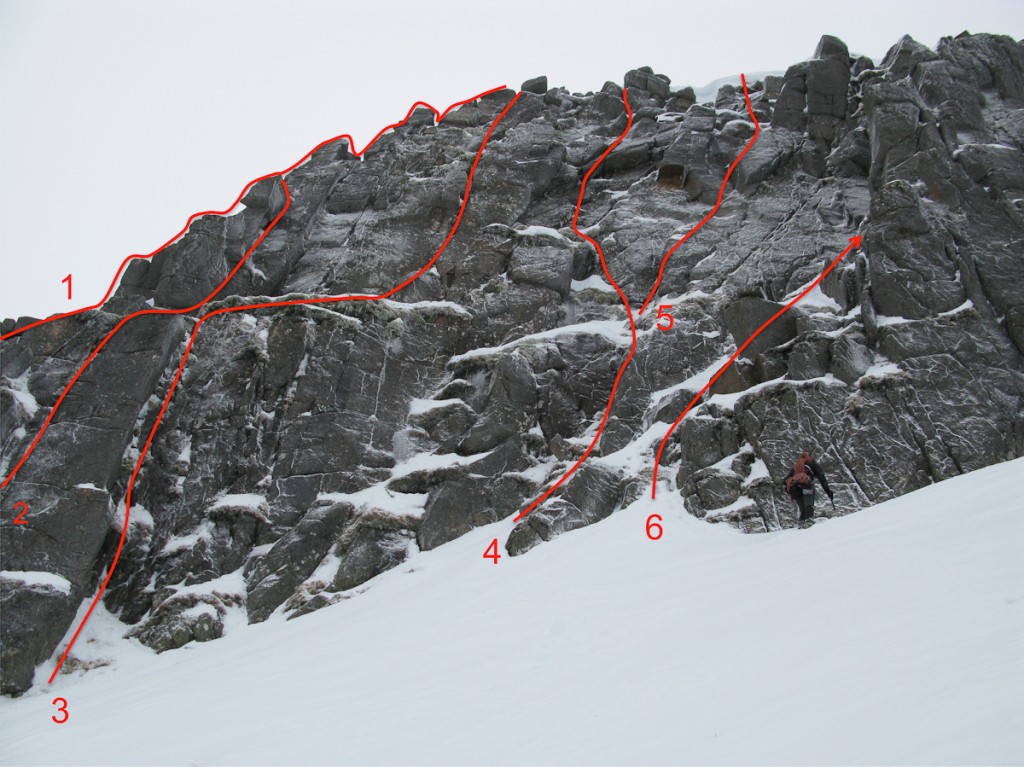 Following on from the Creagan Cha-no – Anvil Buttress Topo post, the photo above shows the routes on Arch Wall. This wall typically provides two-pitch routes up to 70m long, with pride of place going to the eponymous Arch Wall (VII,7) and Smooth as Silk (VII,7), although later in the season the lower 15 or 20m can bank out. As I said in the previous post, Creagan Cha-no is best considered an early to mid season crag.

I chanced upon the cliff in September 2010 when walking down Strath Nethy with a Silver DofE Expedition from the Aberdeen Deeside Explorers group.

We were planning a traverse of the Cairngorms from Glenmore Lodge to Braemar, but we had to call off the trip after the first night. The weather was horrendous with snow and gale force winds, and later we found out that we’d experienced the coldest September night on record on the Cairngorms. As we retreated down Strath Nethy from Loch Avon the rain stopped and the clouds began to clear, and I noticed a frieze of cliffs high up on the plateau edge. They looked attractive, but rather small from afar, but the following weekend I went along to have a look. I was delighted to find a well featured little cliff comprised of excellent granite. It was another wet day, but between the showers I wandered up Duke’s Rib at Moderate (later climbed at Grade II).

Intrigued, I checked through my collection of Cairngorms guidebooks when I returned home. The crag was referred to in the 1960 Mac Smith guide to the Northern Cairngorms, but was considered to be too short for worthwhile climbing. (In those days a winter route was required to be at least 500ft long to be valid, and even summer routes had to be at least 300ft in length to be worthy of recording). Subsequent climbing guidebooks to the Cairngorms mentioned Cha-no, but more recent editions dropped the reference, so the cliff faded into obscurity.

But tastes and styles change. Fifty years on it is perfectly acceptable for a mixed route to be 60m in length if it has good climbing, and in this respect Creagan Cha-no fits the bill!