All Go in the Loch Avon Basin

Posted on January 1, 2012 by Simon Richardson 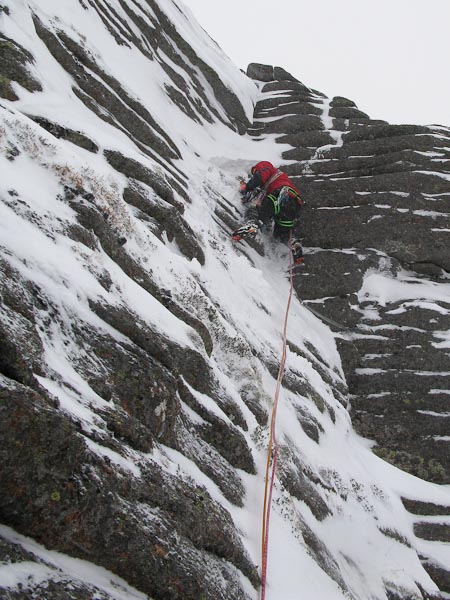 James Edwards battling up the final corner of a new V,7 on Stacan Fharaidh in the Cairngorms on December 30. Strong North-Westerlies had deposited a layer of fresh snow on this south-facing crag. (Photo Simon Richardson)

The hairdryer thaw over Christmas did not completely devastate winter in the Cairngorms, and the Loch Avon Basin was surprisingly busy on Friday December 30.

On the Shelter Stone, Postern had a couple of ascents by Iain Small and Susan Jensen followed by Helen Rennard, Henning Wackerhage and Mark Mosgrove. Over on Carn Etchachan, Mark Chadwick and partner made an ascent of Route Major.

Andy Nisbet and Jonathan Preston had a productive day on Stacan Dubha making the first ascent of Atlantis (III), the line of grooves just right of The Shuttle, and the first winter ascent of Zig-Zag (IV,4) at the left end of the crag.  Meanwhile, on Stac an Fharaidh, James Edwards and I climbed the prominent three-pitch buttress on the upper tier of the West Sector which gave a good V,7 mixed route, starting up steep ground before finishing up easier grooves.