Posted on January 1, 2012 by Simon Richardson 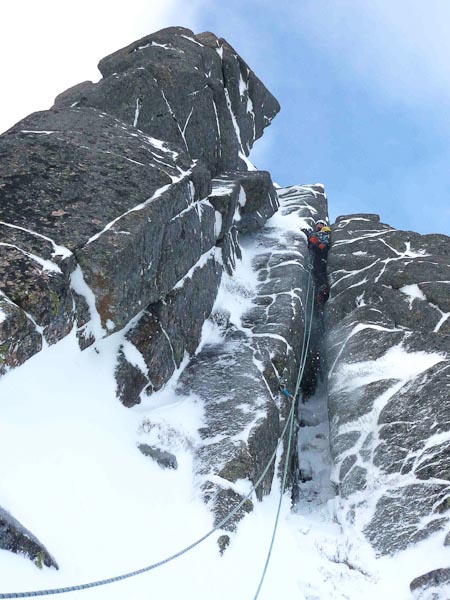 John Lyall on the first ascent of Mainmast (IV,5) on Creagan Cha-no on Cairngorm. Although conditions have not been ideal on the cliff so far this season – typically the more northerly and westerly facing crags in the Cairngorms have been best with the prevailing winds – several parties have enjoyed the good granite and short approach. (Photo Andy Nisbet)

Following on from yesterday’s Cha-no topo posts, a few routes from this season have now come to light. On December 12, John Lyall, Andy Nisbet, Jonathan Preston climbed Frozen Planet (IV,4), the line of corners and chimneys on the left flank of Anvil Buttress. They also climbed Mainmast (IV,5) the steep chimney-crack left of Cutty Sark, which takes the prominent corner on the first buttress (not marked on the topos) left of Chimney Rib, and Short Ridge (IV,4), the next ridge to the left.

On December 30, Andy Huntington, Robin Clothier and George McEwan visited the cliff. “On first impressions we were a bit unmotivated,” Andy explained, “but once we got on the fantastic granite we had a blast. I started 15 to 20m right of the base of the gully of Fingers and Thumbs where the steep wall is split by an evil-looking offwidth crack. It yielded surprisingly at a reasonable grade with a pitch of 40m.  Mac’s Crack (VI,7) had everything in it and gave the ice boys a good work out and we joined Fingers and Thumbs where it steepens. Anyway, I’m keen to get on some of the other lines here if this was anything to go by- it’s a good wee spot!”