Posted on January 3, 2012 by Simon Richardson 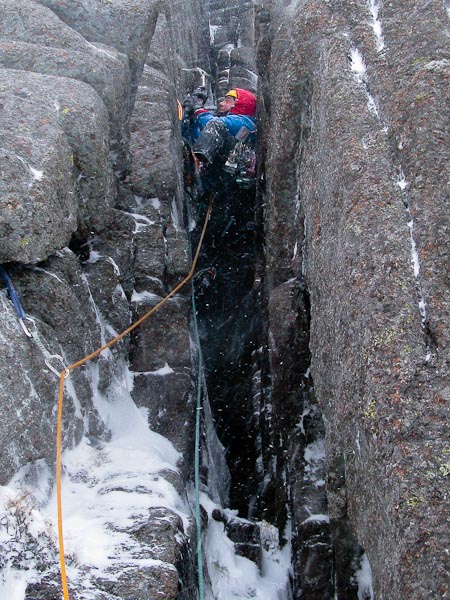 Roger Webb back and footing up the final pitch of Wobble Block Chimney (V,5) on Stac an Fharaidh. The eponymous wobbling block was trundled and is no more. (Photo Simon Richardson)

Yesterday (January 2) was a horrible day in the Cairngorms. Roger Webb and I were not convinced that the turf would be fully frozen after the New Year thaw, so we headed for Stac an Fharaidh on the south side of Cairngorm, where I knew of an unclimbed rocky chimney that would not rely too much on frozen turf. We also reasoned that the cliff would cool down quicker in the brunt of the ferocious south-westerly winds.

It was a fine plan in theory, but when we came to the edge of the bare and featureless plateau above the cliff there was no shelter whatsoever and we were fully exposed to the wind. “It’s hardly a five star gearing up spot,” Roger observed. He then produced a bivouac shelter from his sack and we geared up in that. I’d seen people do this before, but it was a first for me, and although it was a little awkward and constricting, it saved the day.

The chimney yielded in three pitches, with the turf on the lower two pitches being just firm enough where it mattered. As Roger remarked, the final impending chimney could have been anything between Grade III and VII, but in the event it provided a superb pitch of technical 5 with many hidden holds. Once back in the maelstrom on the plateau we bundled everything into our sacks and were blown across the plateau to the Fiacaill and down to the relative tranquillity of the ski area.