Another Busy Weekend in the Cairngorms

Posted on November 22, 2010 by Simon Richardson 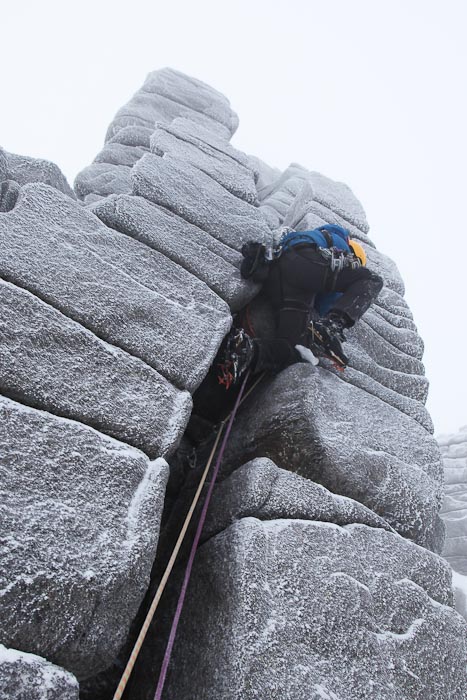 Roger Webb styling up a new Grade IV chimney-line on Creagan Coire Cha-no. Just before this photo was taken, Roger trundled a huge block perched in the triangular niche below his right boot. (Photo Simon Richardson)

As usual, early season activity continues to focus on the Northern Corries. During the weekend Coire an t-Sneachda was especially popular and there were ascents of The Lamp, Belhaven, Burning and Looting, Pot of Gold and Houdini.

Also of note was an adventurous visit to Garbh Choire Mor on Braeriach by Neil Adams and Andy Inglis who made an ascent of Phoenix Edge (V,6). I’ve not heard of any other repeats of this summer VS since it was first climbed by the Andy Cunningham and Andy Nisbet in January 1990, so this may well have been the second winter ascent.

On Sunday November 21, I revisited Creagan Coire Cha-no with Roger Webb. We climbed the prominent narrow buttress split by a IV,4 chimney to the left of the previous routes and made the first winter ascent of Duke’s Rib, which gave a fun Grade II. The real spice of the day came when we climbed Arch Wall to the right of Jenga Buttress resulting in an exciting VII,7. The crux was a strenuous and poorly protected sequence through a capping arched roof, and these moves will stay firmly implanted in my brain for several months to come!