Posted on November 23, 2010 by Simon Richardson 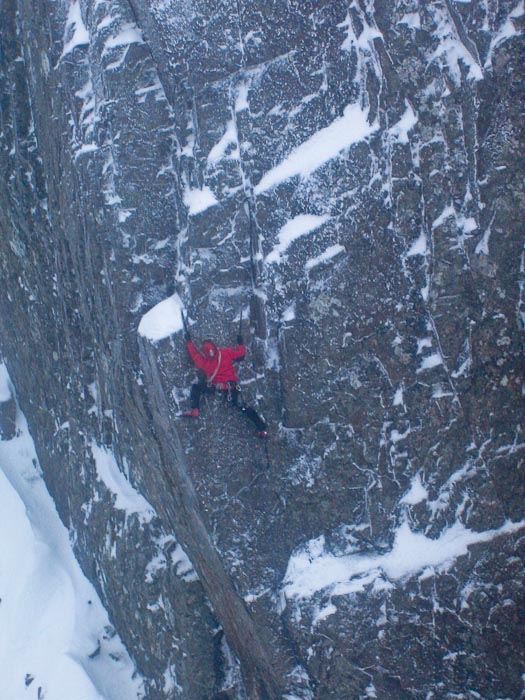 Pete Davies on the first ascent of Catriona (VIII,8), Ben Nevis. This technically demanding route climbs the left arete of Cornucopia before finishing up the corner right of The Secret. (Photo Helen Rennard)

It’s been a busy few days on Ben Nevis with many hard classics such as Darth Vader, Cornucopia, Sioux Wall and Gargoyle Wall all seeing ascents.

Big news from the weekend, was the first ascent of the improbable left arete of Cornucopia by Sheffield-based climbers Pete Davies and Tim Marsh. Pete spotted the line when making an ascent of Cornucopia the week before, and teamed with Tim on Sunday November 21 to make an on sight ascent. Catriona (VIII,8) climbs the arete to the left of Cornucopia and then an easier second pitch up a turfy corner to the right of the main pitch of The Secret. Pete led the crucial arete pitch. “I think this is a good addition because the positions are so good,” he told me. “Its quite unusual for a winter route to be stuck out on an arete like that. We gave it Grade VIII because the start is quite serious.”

Helen Rennard, who was on the other side of Number Three Gully making a smooth ascent of Gargoyle Wall with Finlay Wild, had a grandstand view of the proceedings. “It took Pete over four hours to lead the crux pitch. He was cool as anything the whole way up – it was unbelievable to watch.”