Posted on November 18, 2010 by Simon Richardson 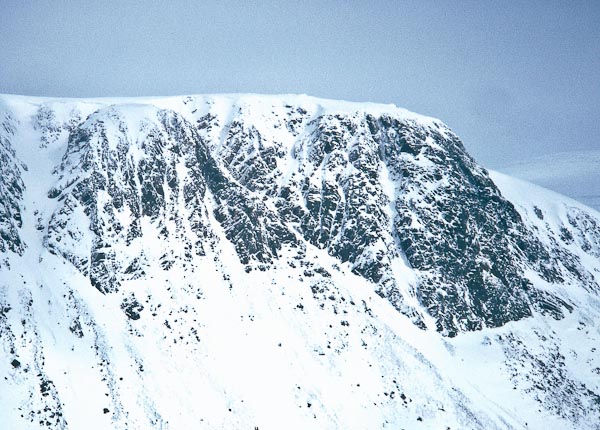 Stag Rocks in the Loch Avon Basin. Thumper (III) lies on the right wall of the prominent Diagonal Gully that slants right to left in the centre of the crag. (Archive Photo Simon Richardson)

The south-facing Stag Rocks in the Loch Avon Basin are a good option after a fresh snowfall. They are best early in the season before the sun gets high in the sky and strips the crag.

Last week, on Wednesday November 10, John Lyall, Andy Nisbet and Simon Yearsley climbed the ridge between The Cardinal and Diagonal Gully. The result was Thumper (III), which starts up a short wall and corner by the start of The Cardinal to gain the crest of the ridge above. It lies partly in the shade and as Andy told me “it’s a nice thing to do in the afternoon when the sun has melted other routes.”

There has only been limited activity in the Loch Avon Basin so far this season. Earlier this week, Scott Webster and Mark Mosgrove visited The Shelter Stone and made an early repeat of Western Union (IV,6). This 210m-long mixed line climbs the ground between Clach Dhian Chimney and Western Grooves and was first climbed during the 1997 International Winter Meet by Andy Cave and Graeme Ettle with the great Slovenian climbers Janez Jeglic and Andres Stemfelj.