Posted on February 1, 2012 by Simon Richardson 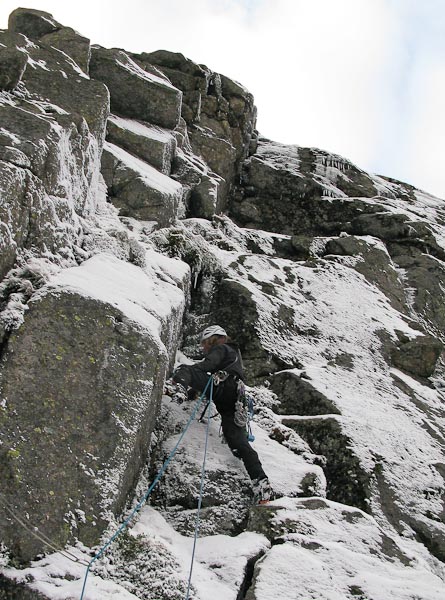 Magnus Stromhall from Sweden on a new Grade VII,7 on Lochnagar’s West Buttress. This part of the route shared a short 10m section with the Strange-Findlay route Isis (which bears left up the snowy slabs), before continuing straight up over the overhanging bulge above. (Photo Simon Richardson)

Several teams made the cross-Cairngorm roller coaster drive from Glenmore Lodge to Lochnagar during the BMC Winter Meet. On Tuesday January 24, Nick Bullock and US climber Bayard Russell climbed Trail of Tears (VII,8) on the Tough Brown Face. The route is normally climbed under icy conditions, but Nick and Bayard encountered a thinnish layer of powder snow. “It was very sustained, “ Nick told me. “The fourth pitch has some quite on-off climbing, sometimes a long way above the gear. Bayard thought it was hard as anything we did all week, but no way was it as hard as the Mindless Finish on Pic ‘n Mix.”

The same day, Simon Frost and Takaaki Nagato from Japan climbed Where Eagles Dare (VII,8) on Eagle Buttress. This may be the first time the original line has been repeated, as two other repeats have climbed significant variations.

Other routes climbed on Lochnagar included Eagle Ridge and Parallel Buttress, and on Saturday January 28, Magnus Stromhall from Sweden and I climbed a new VII,7 on West Buttress. The sustained six-pitch route climbed the groove system left of Isis on the lower tier, before taking corners and grooves just right of Isis on the steeper upper tier. As always with routes on the West Buttress, this had to be a carefully timed ascent as the buttress tends to strip fast in the sun as the season progresses and the sun rises higher in the sky.