For Crying Out Loud!

Posted on February 1, 2012 by Simon Richardson 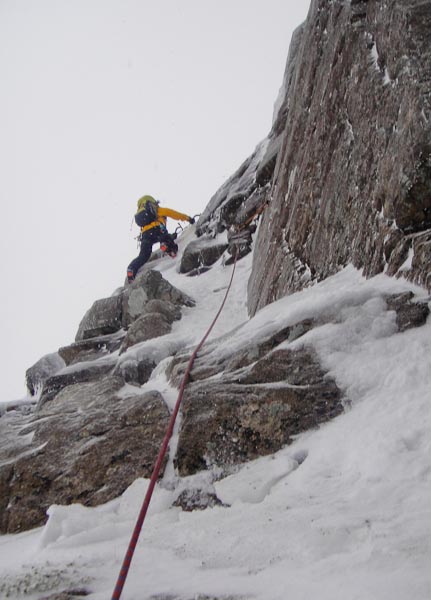 Jeremy Windsor crossing the icy steps on the first ascent of Thea (III) on the west side of The Garadh on Ben Nevis. This route was one of the most walked past unclimbed medium grade route on the mountain. (Photo Jeremy Windsor Collection)

As chance would have it, on Friday January 20, two teams independently set their sights on the first winter ascent of Cryotherapy, a VDiff on the west flank of The Garadh in Coire na Ciste on Ben Nevis. Jeremy Windsor, Piers Harley and Rob Marson arrived first and climbed the obvious line of icy ramps up the centre of the face. “We climbed diagonally for one pitch (60m) crossing a series of iced up steps,” Jeremy told me. “We felt it was worth a grade of III and possibly a star! A very enjoyable preamble for something like Glover’s Chimney or White Line.”

Just as Jeremy, Piers and Rob were gearing up, Dafydd Morris and Matt Buchanan arrived with the same intention. Instead, Matt and Dafydd climbed the line of mixed grooves to the left to give Crying Out Loud (IV,5). Dafydd is unsure where their route starts in relation to the summer line, but thinks they finished up the final groove of Cryotherapy.

“I couldn’t believe it,” Dafydd told me. “We got to the base of the route and there were three guys there saying that was their target for the day! Hence the “Crying Out Loud” name suggestion. They climbed the snow ramp heading up and left above them, which they thought was Cryotherapy, hence we’re all a bit confused now. Anyway, a fantastic day in little wind, top turf and gear, a cracking little route whatever it was, exposed with great climbing.”

Jeremy decided to name their grade III Thea, so it will be up to the next guidebook writer to sort out the relationship of theses two climbs with the summer line of Cyotherapy. (Ooops, that will be me then!)

One Response to For Crying Out Loud!