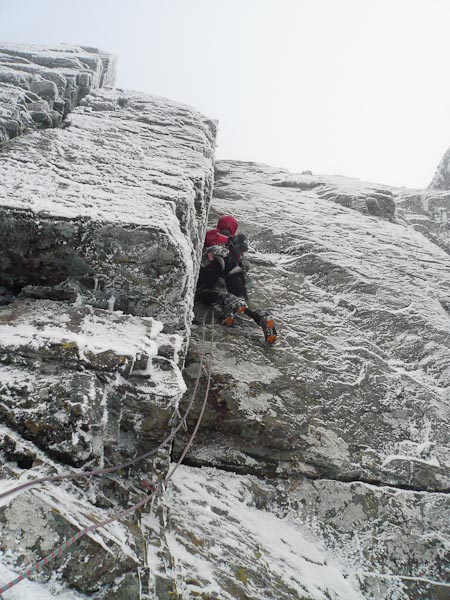 Takaaki Nagato from Japan making the first ascent of Sake (VIII,9) on Number Three Gully Buttress on Ben Nevis. This difficult three-pitch route takes the left side of the wall between Babylon and Winter Chimney. The only other route in this area is Ian Parnell’s Burning with Anxiety (aka Snuff Wall) that was climbed in March 2008. (Photo Dave Almond)

But the route of the day (and hardest new route of the week) fell to Simon Frost and Takaaki Nagato from Japan who climbed Sake (VIII,9), the impressive line around the arete to the right of Babylon. Simon led the delicate second pitch, and Takaaki tip-toed up the crux, the impressive hanging groove to the right of the final chimney of Babylon. Throughout the meet, Takaaki and his colleague Ryo Mastumoto, impressed everyone with their quiet and efficient climbing style that resulted in a string of impressive ascents such as The Vicar and Daddy Longlegs in Coire an Lochain, Where Eagles Dare on Lochnagar and Unicorn in Glen Coe.