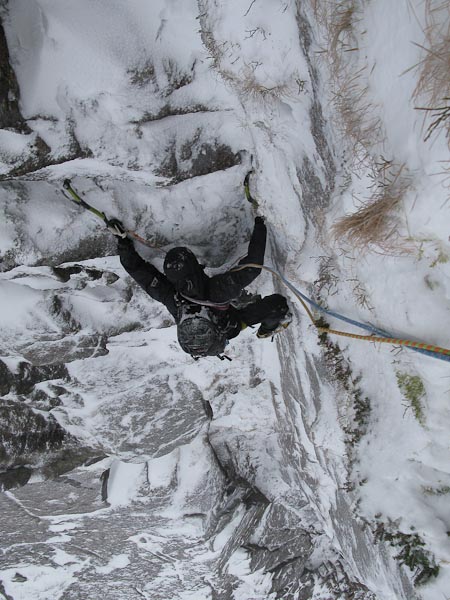 Markus Griesshammer from Germany on the first ascent of Red Dwarf (VII,7) on Stacan Dubha. This route takes the prominent groove system to the right of Goldilocks, which saw its first ascent earlier this winter. (Photo Simon Richardson)

The Loch Avon Basin has been a much-visited venue this season, and it was a popular location of Day 2 (January 24) of the BMC Winter Meet with two ascents of the classic Postern on the Shelter Stone. Iain Small and Magnus Stromhall from Sweden made a rapid ascent of Citadel, and across on Stacan Dubha, Markus Griesshammer from Germany joined me for a new route up the prominent pillar on the left side of Stacan Dubha. The four-pitch Red Dwarf followed a line of grooves and cracks up the right side of the Goldilocks pillar, with Marcus pulling out the stops leading the technical second crux on the third pitch. The following day he showed his mixed climbing credentials by on sighting Fast and Furious at Birnham.