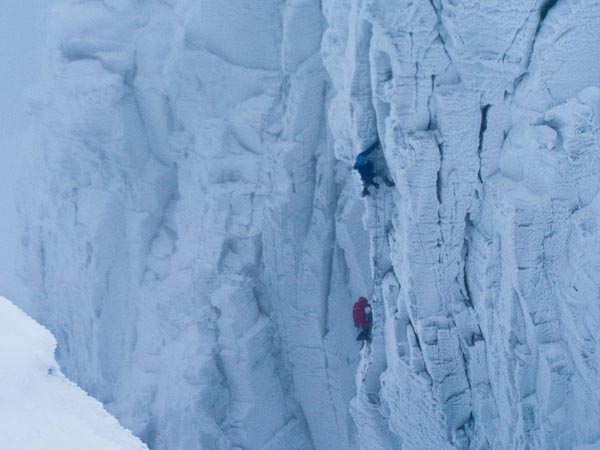 Caption: Nick Bullock about to commit to crux section on the first full winter ascent of the Mindless Finish (IX,10) to Pic ‘n Mix in Coire an Lochain, Northern Corries. “My axes we alternately blowing, and if I’d come off, it would have been a 60ft fall on to two Bulldogs,” Nick explained afterwards. (Photo David Mora)

On Day 1 (January 23) of the BMC International Meet, Nick Bullock set the pace with the first full winter ascent of the Mindless Finish (IX,10) to Pic ‘n Mix. This summer E3 5c pitch is followed by the original Pic ‘n Mix for 10m before taking a rising traverse to the right.

“I was climbing the second pitch when Dave Garry, who was on Hoarmaster, shouted across to me,” Nick told me. “’Why are you going around the corner, when you can go straight up,’ Dave called. ‘It still hasn’t been done!’ So I went straight up. It was an emotional experience because it was difficult to protect the verglassed cracks and I found it very hard going for the slab at the top. I had to commit to very steep moves on absolutely nothing!”

Nick’s partner, Bayard Russell from New Hampshire in the US, who had made a smooth lead of the first pitch, summed it all up – “Hey, that was rowdy man!”