Posted on December 5, 2020 by Simon Richardson 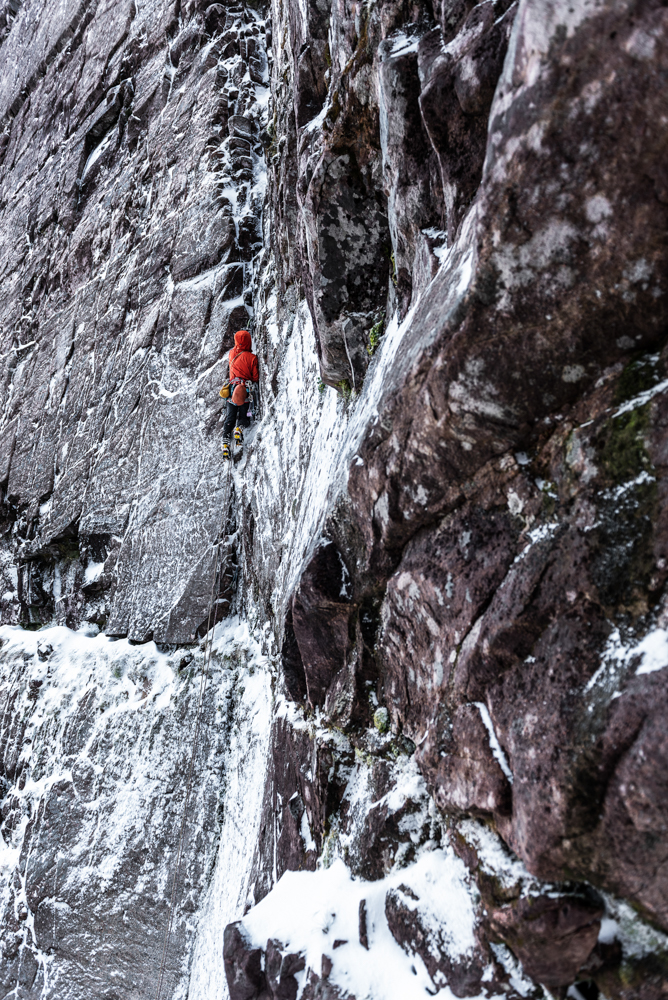 Callum Johnson on the run out first pitch of The Flying Fox (VIII,8). This serious and sustained route climbs the right side of Hayfork Gully Wall on An Teallach. (Photo Marc Langley)

The first significant new route of the season fell to Callum Johnson and Tim Miller on December 3 when they climbed the right side of the Hayfork Gully Wall on An Teallach. The Flying Fox (VIII,8) lies to the right of The Silver Fox after starting up its first pitch.

“The weather was perfect, with not a breath of wind, and superb views,” Callum told me. “I had wanted to climb on this impressive wall after descending Hayfork Gully a couple of years ago. Seeing Greg and Guy’s route last season reminded me of it again. And then, after reading Martin Moran’s comments after the first ascent of The Wailing Wall on scottishwinter.com, I thought it would be a good early season option. Tim was easily convinced.

Conditions weren’t quite as good as I hoped – the snow had not stuck to the steepest sections of the wall, but we found a line that was in winter nick.

I started up The Silver Fox which was very bold! Thin turf hooks and thin feet with potential 8m ground fall. I continued for 25m before breaking right and up a groove towards an obvious left facing corner. Tim then led the vertical corner – steep and well protected but with some tiny footholds, then the technical wall above

I led a third pitch, up a wide steepening groove to below a roof before stepping right and climbing balancey easier angled narrow grooves. We topped out onto the ridge in the fading light – windless, with the stars starting to appear – Scottish winter at its best!”

Simon Richardson is a passionate Scottish winter climber
View all posts by Simon Richardson →
This entry was posted in New Routes and tagged An Teallach, Callum Johnson, Tim Miller. Bookmark the permalink.

1 Response to The Flying Fox