Posted on November 27, 2020 by Simon Richardson 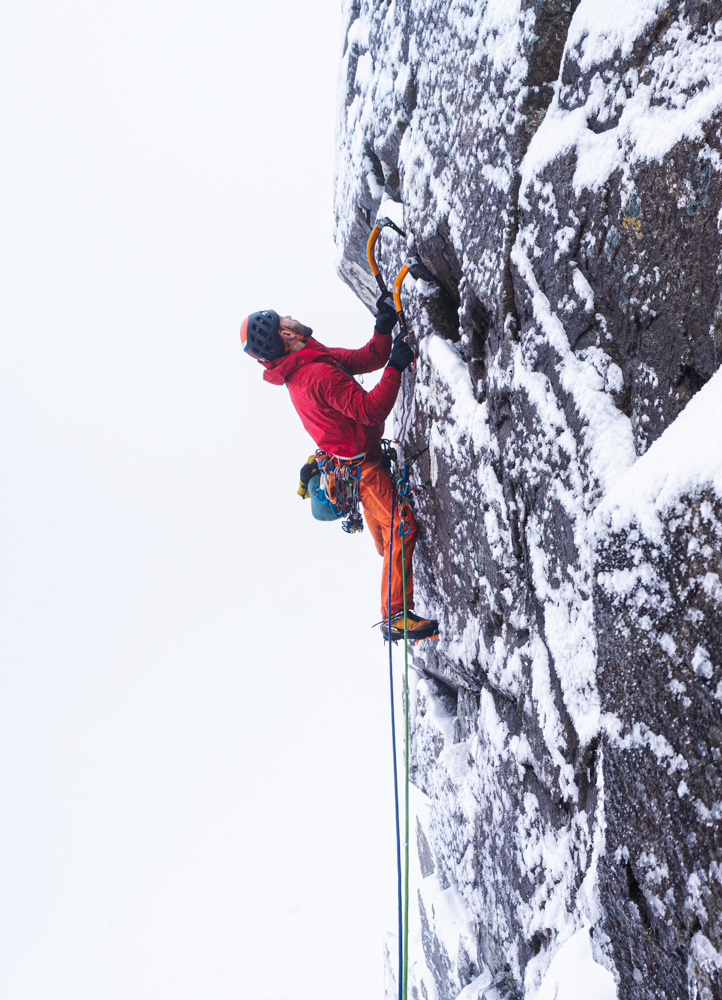 Greg Boswell, Callum Johnson and Hamish Frost pulled off a notable repeat on November 25 when they made the second ascent of Curly’s Arete on Number Three Gully Buttress on Ben Nevis. This steep VIII,8 follows the right edge of the great Knuckleduster corner and was first climbed Ian Parnell and Sean Isaac from Canada during the 2007 International Winter Meet. Although it is not a summer rock route, the route style is very much snowed up rock climbing, and was an inspired choice for the thin early winter season conditions we are experiencing just now.

“Yeah it was cool to see this area looking wintry,” Greg told me. “It’s always good to give the Number Three area a sniff when the freezing level is hovering around 900-1300m. We climbed in a three with Callum, Hamish and I swinging leads throughout.

I’d been thinking of climbing this section of wall since I did Tomahawk Crack back in 2012. I messaged Ian Parnell at the time to roughly see what the deal was, and I’ve been keeping it in the back of my mind ever since for an occasion just like this. When the conditions are limited, this wall really holds onto the whiteness and gives some awesome sport. We basically just followed our noses and took the obvious cracks through the original steepness then direct up the face following the right side of the arête. Some thin and involved climbing throughout with adequate but not super easily won gear made for an awesome early season route to get us dialled-in straight off the mark.”

As is so often the case, local knowledge was key to the ascent. “Greg’s superb knowledge of the crag led us to choosing the route,” Callum observed. “Although if he hadn’t already climbed all of the other routes(!) anything on the Sioux Wall face would have been a good option on Wednesday). Snowed-up rock was all it needed, and anything that avoided turf or loose blocks. It was a good route, and as Greg says, we followed our noses up the right-hand side of the arete, linking up some thin discontinuous cracks. There were some delicate thin moves on pitch 2 and then a long third pitch with a bit of everything.”

Making the best of the available conditions, Greg, Callum and Hamish made an ascent of the modern classic Babylon (VII,7) the follow day. This is another route which is suited to snowed up rock conditions. Curly’s Arete was named after New Zealand climber Karen ‘Curly’ McNeill who disappeared on the Infinite Spur on Mount Foraker in Alaska in 2006.