Posted on November 24, 2020 by Simon Richardson 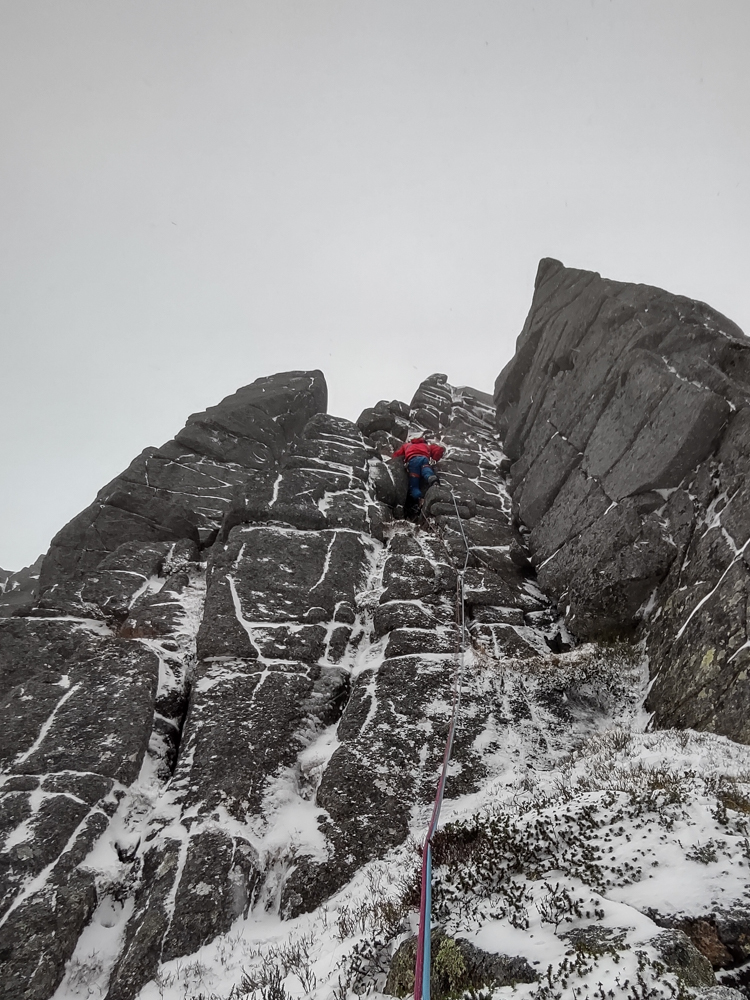 Roger Webb on the first ascent of Another Pointless Eliminate (III,4) on Creagan Cha-no. The route starts up the wide crack between Mainmast and Cutty Sark. (Photo Gary Kinsey)

It’s been an unusually slow start to the Scottish winter season. Normally by the second half of November winter climbing is in full swing, but temperatures have been higher than usual and the weather very unsettled. Winter routes were climbed on the morning of November 4 in the Northern Corries and Braeriach, and a cold day after overnight snow brought snowed-up rock routes in the Northern Corries into condition on November 19. Early season favourites such as Savage Slit, Fallout Corner, Hidden Chimney, The Message and Pot of Gold were all climbed.

A thaw and cooling brought out more climbers on Sunday November 22. In the snowier West, Gargoyle Wall on Ben Nevis and Golden Oldy on Aonach Mor saw ascents, but those looking for sport in the Northern Corries were generally frustrated by the bare wind-blown crags. Several teams headed for east-facing Creagan Cha-no, which had more chance of holding onto the precious snow as Roger Webb explains.

“Frustrated by the lack of winter (but not as frustrated as those stuck in levels 3 and 4), Gary Kinsey and I went, along with numerous other hopefuls, to Cha-no on Sunday. We were hopeful that snow blown on the westerly winds may well have been deposited there. It had been, but unfortunately a lot had melted straight off. It helps if you know the crag as there are numerous little sheltered north-facing pockets that hold snow and cold better than other areas. Along with another party we headed for one such pocket, the Mainmast Area. Happily it was suitably white although it was necessary to choose rock rather than turf based options.

The others quickly got on to Mainmast while Gary and I, having already done it and Cutty Sark, opted for the central crack-line. This turned out to be an entertaining III,4. It goes straight up to the middle ledge and then in an artificial effort to keep it separate takes the left-hand exit from the wide finishing chimney of Cutty Sark which cuts out right.

The other party, Andy Harrison and Calum Agnew, having rapidly despatched Mainmast, being twice as fit, twice as brave and half our age then repeated our route (which we called Another Pointless Eliminate) in half the time with half the runners and twice the style. A fun day out!”