Posted on December 6, 2020 by Simon Richardson 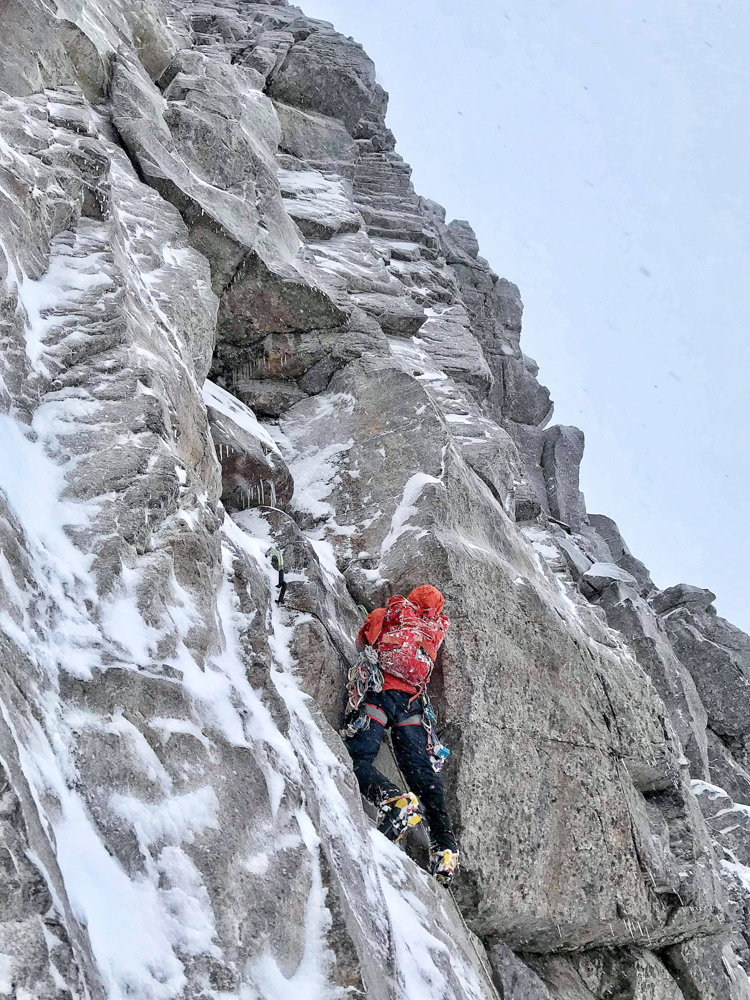 Callum Johnson starting up the second pitch on the first ascent of Never Never Land (VIII,8) on Beinn Eighe. The wide crack can just be seen exiting the roof’s left-hand side provided a strenuous crux. (Photo Tim Miller)

On December 4, the day after their ascent of The Flying Fox (VIII,8) on An Teallach, Callum Johnson and Tim Miller visited the Eastern Ramparts of Beinn Eighe and climbed a second new route. Never Never Land was graded VIII,8 which makes it two Grade VIII first ascents on consecutive days for the dynamic young duo. Two new Grade VIIIs in two days is a rare feat– a well-known example took place in March 2009 when Andy Turner made the first winter ascent of Sassenach (IX,9)on Ben Nevis followed by Bruised Violet (VIII,8) on Beinn Eighe the following day.

“We walked in with tired legs, up and over to have a look at the quartzite tiers on Beinn Eighe,” Callum explained. “We had some ideas but had an open mind to go and climb whatever looked best. A strong north-easterly wind was hitting the crag and made it feel fairly full-on with lots of snow being blown around.

We ended up climbing a new route at the far-right end of Eastern Ramparts, starting between Fairytale Groove and Happy Ever After to the girdle ledge. This first pitch followed a series of good corners. The second pitch climbed the right-hand side of the smooth white wall, via a groove to a roof with a wide crack exiting leftwards, then up the continuation groove and cracked wall. The crux section involved some strenuous stein pulls(!) around a roof with only small edges for crampon points, then an awkward wide crack. Thankfully the positive hooks returned for the upper section of the pitch.

The route was generally fairly typical Beinn Eighe style, steep positive hooking with good gear – we were both shouting about how much fun it is to climb!”