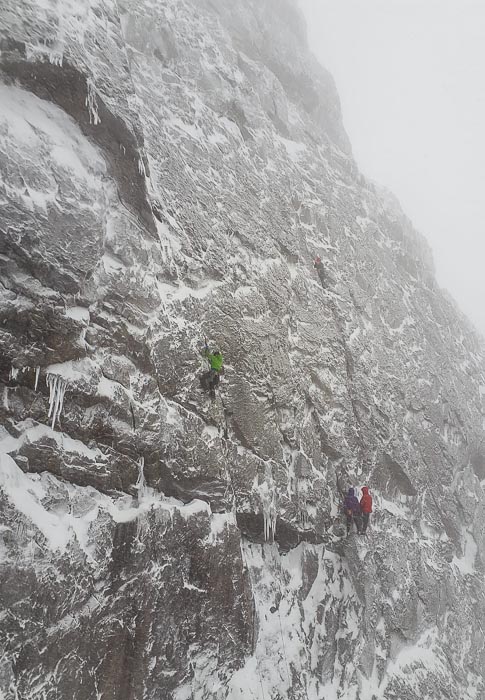 All go on the South Wall Garbh Bheinn! The final day of the winter meet reached a climax with first winter ascents of Gralloch (IX,10) and Scimitar (VII,8) doubling the previous number of winter routes on the wall. (Photo Neil Adams)

Two new routes on Garbh Bheinn was the big news from the last day of the winter meet (February 28). The South Wall is very rarely in winter condition, but continuous storms had plastered it in snow making it a very wintry proposition. Tim Miller, Callum Johnson and Damian Granowski (Poland) made the first winter ascent of Scimitar (VII,8) and Neil Adams, Peter Hoang (Canada) and Lukas Klingora (Czech Republic) made the first winter ascent of Gralloch (IX,10). Damian led the simmer crux of the VS Scimitar, and Peter made an outstanding lead of Gralloch, which is E2 in summer.

At a more modest level, Al Todd and I took a few hours away from our event coordination duties to make the first ascent of Cabin Fever (IV,6) in the Monadhliath. This two-pitch route lies on the south-east facing Stac Buidhe and was the first route on the cliff. Situated less than an hour’s walk from the Meet HQ in Laggan it was ideal for a quick morning dash.

The weather deteriorated quickly through the day and the avalanche danger was very high. Teams on Ben Nevis wisely restricted themselves to the Douglas Boulder and Vanishing Gully areas. Of note was the possible second ascent of Right-Hand Chimney (VI,7) by Alfie Maun, Emily Ward and Wadim Jablonski from Poland. Wadim thought the route merited at least M7 so it will be upgraded in the next Ben Nevis guidebook.

The weather was wild in the Northern Corries, but ascents were made of Honeypot and Wachacha on the Mess of Pottage, and Jamie Skelton and Tyrm Saeland (Norway) climbed Big Daddy in Coire an Lochain. Everyone was down safe and back for the final event at Tisos in Aviemore where Guy Robertson made an outstanding presentation that captured the essence of pioneering new routes across the Highlands in both winter and simmer.

The meet had been a major success with over 150 routes climbed, and on the final morning there were many tired legs at Aviemore Youth Hostel. Ideas had been shared, friendships made and partnerships formed. Our international guests had been given a magnificent taste of Scottish winter climbing and left with huge smiles on their faces.