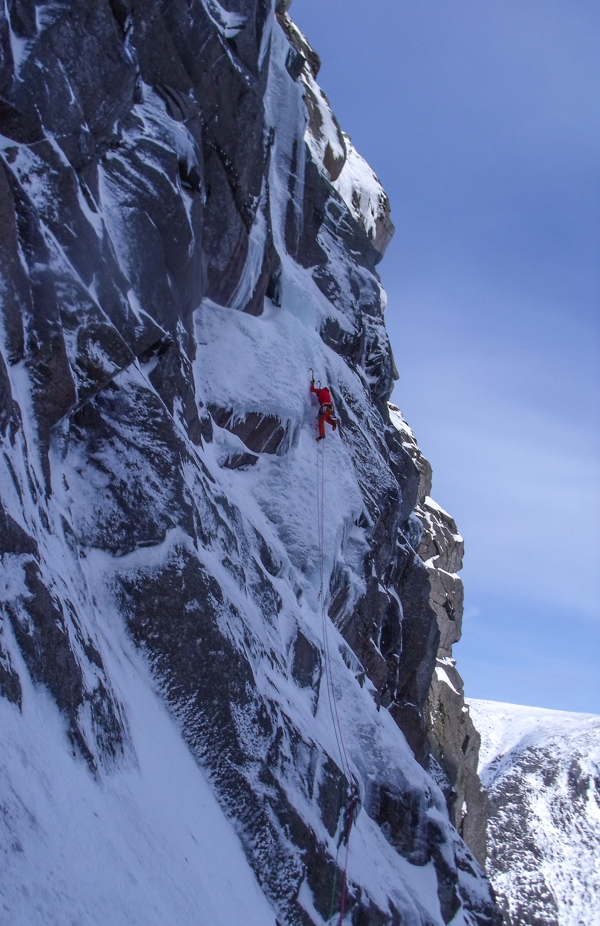 Greg Boswell powering up the first pitch of The Israelite (VIII,8) during the first winter ascent. This highly prized objective on the awe inspiring Central Gully Wall on Creag an Dubh Loch was climbed on the fourth attempt. (Photo Guy Robertson)

Guy Robertson and Greg Boswell pulled off a long sought after new route on March 4 when they made the first winter ascent of The Israelite (VIII,8) on Creag an Dubh Loch. This summer E4 provides superlative rock climbing but it is often wet, so under the right conditions, it was a logical target for a winter ascent.

With the Eastern Cairngorms swamped in snow, I suggested to Guy, who is renowned for being one of the finest tacticians in the game, that this was an inspired route choice. Guy was having none of it:

“Fourth time in to try the route. Wettest February on record. Two weeks of cold but not too cold. Everywhere above 900m totally swamped. Pretty obvious choice of venue, I thought!”

Well maybe, but impressive all the same as this was the first route Guy and Greg have climbed together this year. A new winter route on Creag an Dubh Loch is as good as it gets.

“The venue seemed a pretty obvious choice in the end,” Guy continued. “We followed the summer line all the way – to be honest this is where the ice took us, pretty much direct into the top corner. Gaining the ice at the start required some faith – kind of like the Etive Slabs, but without touching rock!

Greg belayed below the Goliath Icicle, which was in pretty good shape. Above this, a beautiful weep formed on the slab just right of the thin crack, which led to the big upper corner. This sported a few ice streaks, but unfortunately these were of the eggshell variety, so little use – this pitch was probably the crux, giving sustained teetering on reasonable hooks but very poor feet.

The final pitch up to the plateau was a romp up thick Grade IV ice. As expected it was a ‘top drawer’ experience, just like any other route on this wall. I’ve been lucky enough to do a handful now, and they are all of exceptional quality. Their ephemeral nature just makes them all the more special, and I’m looking forward to the next one already!”