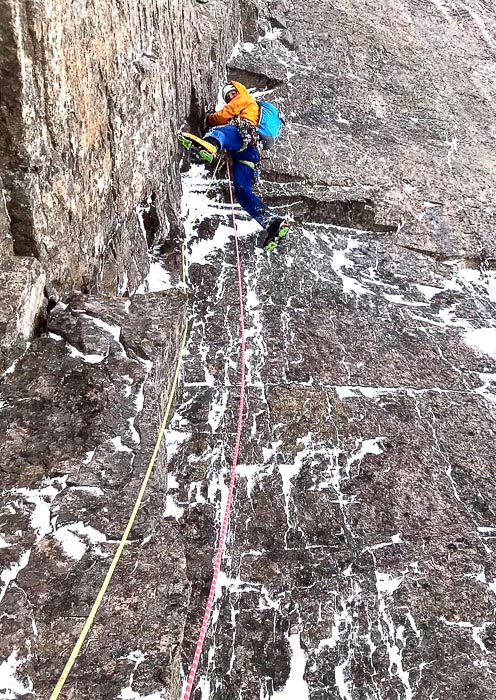 Dave Almond on the first ascent of The Irony (IX,9) on Beinn Eighe. This steep and sustained mixed route on the Eastern Ramparts is a more direct version of the summer E1 Claustrophobic Corner. (Photo Jamie Skelton)

Dave Almond had an outstanding trip up to Scotland last week and came away with two new routes on Beinn Eighe. Dave takes up the story:

“I drove up on the March 7 and started my week with a very soggy ascent of Slav Route (VI,5) on Ben Nevis with Owen Samuels followed by a slightly more amenable weather day on Avenging Angel Direct (VIII,8) with Jamie Skelton. This had been on my list for a few years but it rarely looks white enough as it follows an overhanging corner system that shelters it from most weather. This time it was looking good with ice and frozen turf plastered over the left-hand aspects. It was originally climbed in four pitches but Jamie decided to keep climbing after pitch one running the first two pitches together. I followed up and ran the next two together, which made for a really entertaining climb that builds slowly to the overhang climax on the top wall. Every pitch was excellent and it certainly deserves its three star rating.

After a much appreciated rest day Jamie and myself headed up to the summit of Beinn Eighe and after a front pointing crawl on hands and knees up the ridge we geared up in the 80mph wind and ran for the shelter of the Eastern Ramparts. Jamie suggested we looked at the summer line of Claustrophobic Corner. Despite its unappealing name we set to but ended up taking a more direct line through the overhangs right of the summer line, sticking with the cracks, which gave some fine technical moves followed by powerful moves through the to the belay. We called our route The Irony and after some careful pondering graded it IX,9.

The following day with a better weather forecast we again headed up feeling a bit heavy-legged. This time we picked the summer E1 Fear of the Dark on the Eastern Ramparts. Initially it climbs the right hand side of a big chimney which follows a drainage line offering good ice then swings right around the huge block on the Upper Girdle to climb a very icy corner going right past an overhang and up a steep corner to a belay. We then deviated from the summer line and took an obvious chimney direct to a platform and a choice of easy exits.

The Irony is worthy of three stars as we were buzzing after doing it, whilst with  Scotophobia VII,8 we were tempted to abseil off as we were tired and got soaked down to our underpants on route with the heavy snowfall and rising temperatures. But we dug deep and made it to the top with a sigh of relief.”

Dave says he loves the name Scotophopia – “when fear of the dark reaches a degree that is severe enough to be considered pathological, it is sometimes called scotophobia”. The route lies between the Iain Small and Pete Macpherson’s Fear of the Cold and Dark (VIII,8) and the summer line Fear of the Dark.