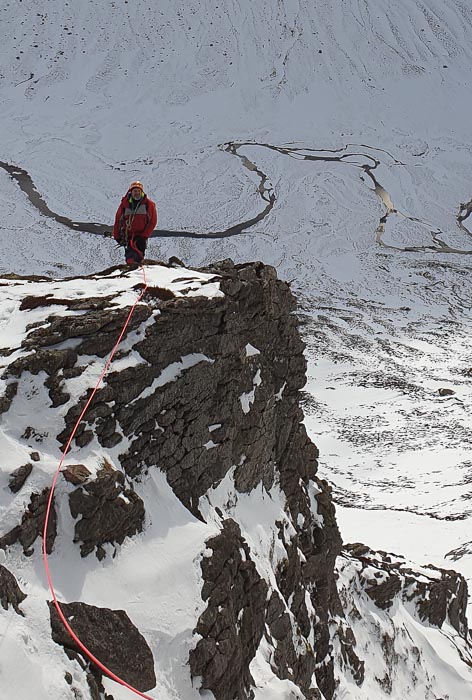 John Higham arriving at the top of the previously unclimbed Hindmost Ridge (IV,4) on The Devil’s Point. This 400m-long route is one of the longest ridge climbs in the Cairngorms. (Photo Iain Young)

The first ascent of Hindmost Ridge on The Devil’s Point on March 4 demonstrated that there are still major unclimbed features even in well-known parts of the Highlands such as the Cairngorms. Iain Young, John Higham and Kenny Brookman’s ascent of the 400m-long ridge bounding the right side of Geusachan Gully on the south side of the mountain was a major coup and one of the finest ascents of the season. Iain takes up the story:

“I spotted this possible target on a photo back in August, did some research and couldn’t quite believe it hadn’t been climbed already by the likes of Mac Smith, Bill Brooker, Tom Patey, Greg Strange, Andy Nisbet or Simon Richardson! One possibility was that what I had seen on the picture was a bit of an optical illusion. So, I had to find out if it was real.

A reconnaissance in September confirmed two things; the ridge was there but it was also a long way from anywhere. A team of three seemed like a good idea, for what promised to be a long but straightforward route, as it meant lighter loads. John and Kenny needed little persuasion to be roped into the venture.

Of course, these south-facing routes need enough snow to be enjoyably wintry, but not so much snow overall that the approach takes away all the enjoyment. A kind of Scottish winter Goldilocks zone. On the first attempt, in November last year, things were too warm and the crag was bare, so we took an enjoyable alternative at grade II/III up a slabby rib finishing on a broad snow arete leading to the ridge just north of the summit of Carn a’Mhaim.

The next attempt had to wait till early March, after the series of icy storms that saved the winter overall. This time even lighter loads, but much more snow, resulted in a five and a half hour approach from Linn of Dee via Derry Lodge…

The route itself initially looked a bit bare, however, a hidden series of snowy and icy turfy grooves led upwards from near the bottom of Geusachan Gully in a sort of wintry spiral. First left of the initial nose, then right of the crest, before two trickier pitches took us, after 200m of climbing, to a further 200m of moving together type ground. Very, very enjoyable, sunny and kind of alpine in ambience.

All smiles on the trackless summit, despite the thought of the four hours back to the car! The route name references both the Devil (as in the Devil take the Hindmost) and the fact that the ridge sits behind the frontal face.”