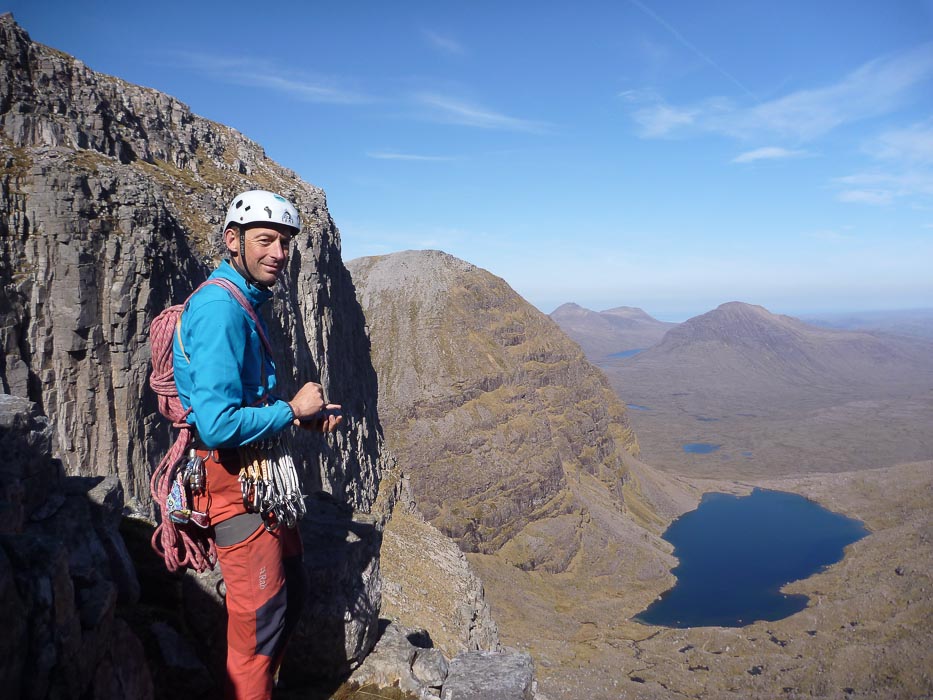 Ewan Lyons in Coire Mhic Fhearchair on Beinn Eighe in May 2019 looking over to the Eastern Ramparts. On that day he climbed Boggle (E1) and made the first ascent of White Hammer (E2). Quiet and unassuming, Ewan was the most prolific Scottish winter solo climber of his generation. (Photo Michael Barnard)

On March 13 Ewan Lyons, known to some as Captain Solo, died as a result of a fall on Beinn Dearg. Dave Kerr has written the following tribute:

Ewan was one of the most prolific and accomplished Scottish winter soloists of recent times. His solo ascents were particularly impressive when compared with his lead standard. Ewan’s role model was Tom Patey who reputedly soloed at about the same grade he led. VI 6 was Ewan’s lead limit and he regularly soloed V 5.  Many of his solo ascents were at remote and rarely visited venues further adding to the commitment required. He had an impressive confidence and fluidity of movement on ice and although a list of routes can never give a full impression of a person some of his solo days were remarkable: One weekend involved Ice Maiden (V,5) on Ben Alder on the Saturday and a link-up of False Scorpion (V,5), Sideslip (III) and Red Chimney (V,5) in the Cairngorms on the Sunday. A day on Liathach featured eight routes of up to V,5.   Another Cairngorm day consisted of Cascade (V,5), Cascade RH (IV,4), Devil’s Alternative (IV,4, FWA) and The Chancer (V,6). His UKC logbook for The Chancer recorded with characteristic understatement ‘note to self: do more pull ups.’

Ewan had a seemingly uncanny ability to be in the right place at the right time to climb ephemeral ice routes. In reality it was more canny than uncanny, a product of his huge experience in the Scottish mountains.  In addition to his climbing he was also a double Munroist (including Tops) and had completed rounds of Corbetts, Grahams, Donalds and Furths. If you wanted some beta on an obscure hill or crag Ewan was the man and often the main challenge climbing with him was to find a route he hadn’t done.

The week before Ewan’s accident we climbed Royal Pardon as a three. Looking back it illustrates much of what made Ewan a good climber, a great climbing partner and a good guy to spend time with.

Self-deprecating about his speed and abilities on the walk in, he dispatched the crux with style in far from ideal conditions. At the stance, whilst Andy led the top pitch we joked and traded ‘Half Man, Half Biscuit’ lyrics. Never one to worry about kit, Ewan climbed in a pair of cheap waterproofs with the arse hanging out of them. Back in the car park Ewan and Andy swapped numbers to climb again in the future. Andy knew about Ewan because, despite him not being well known, those in the know knew. Andy and I headed home to Inverness but Ewan, typically, stayed in the west hoping to solo the following day before the weather deteriorated. He was always keen for the chance to get another route in.

There was of course much more to Ewan than just climbing. Music, building projects and his job as a lecturer at University of the Highlands and Islands all helped to pass the time when he wasn’t in the hills. Spending time with his wife Karen, friends and family were all really important to Ewan and climbing partners have said he was particularly popular with their children.

Ewan’s death leaves a big hole in the lives of those who knew him but it also robs the Scottish climbing scene of one of its most committed and adventurous under-the-radar enthusiasts. Many of his regular climbing partners paid tribute to him mentioning his calm determination and easy going nature. I can think of no better tribute than a friend’s summary after climbing with Ewan for the first time: ‘Aye, he’s a proper climber.’

Simon Richardson is a passionate Scottish winter climber
View all posts by Simon Richardson →
This entry was posted in Commentary and tagged Dave Kerr, Ewan Lyons. Bookmark the permalink.