Fear of the Cold and Dark 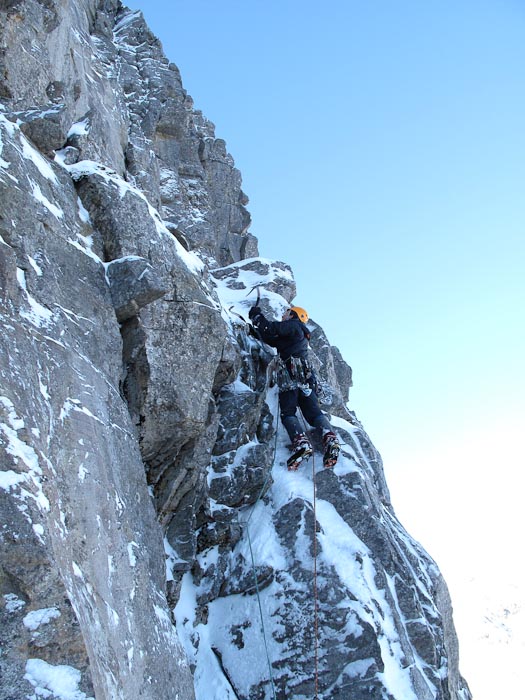 Iain Small on the first ascent of Fear of the Cold and Dark (VIII,8), Beinn Eighe. This route is a more direct version of the summer E1 Fear of the Dark. (Photo Pete MacPherson)

Iain Small and Pete MacPherson are on a roll. On Tuesday March 2 they visited the Eastern Ramparts on Beinn Eighe and came away with a new VIII,8 – Fear of the Cold and Dark. They started up the summer E1 Fear of the Dark before going direct up  the very steep ground above. Serious, strenuous and fantastic climbing was the verdict!

There have been some excellent new additions in Torridon recently. On February 5, Martin Moran and Robin Thomas made the first winter ascent of the summer E1 Pale Rider, on the Eastern Ramparts. With pitch grades of 8, 8, and 9 this sounds a tough proposition. See Martin’s blog for his account of the climb moran-mountain.co.uk/blog

Also on Beinn Eighe, Andy Nisbet and Helen Rennard visited the Pineapple Cliff on February 28 and climbed the steep Pina Colada (VII,7) that takes the well-defined buttress between the left and central chimneys. Icy cracks made it hard work to place gear and Andy compared the route in stature and quality to the routes on the nearby Fuselage Wall.