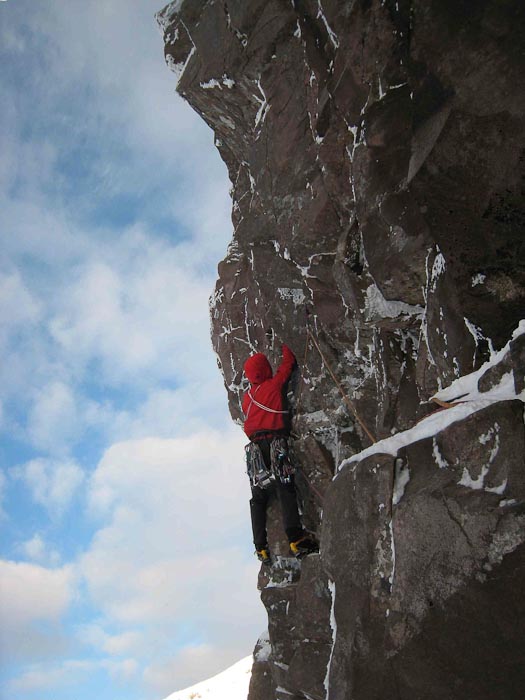 A long standing problem in the North-West was put to bed yesterday (March 3) when Guy Robertson and Iain Small made the first winter ascent of Sherlock on Fuar Tholl’s Mainreachan Buttress. This steep HVS line on the vertical right flank of the buttress has been the target of several teams in recent years. One very accomplished pair had tried it three times before conceding defeat.

Guy tried the route on Feb 28 with Dave Hesleden but the pair ran out of daylight close to the top of the buttress. This time Robertson and Small started up Sleuth Start but where that goes left they kept going directly up to the first terrace where a short pitch led right to the second pitch of Sherlock, which they followed to the top.  Guy told me that it was “a really cool, sustained route, not too hard but with lots of interest all the way (VIII,8).”

Guy and Iain were surprised to encounter footsteps high up on the route. It turns out that Rich Cross and Andy Turner were there on Monday March 1.  They climbed a line graded VI,7 that starts up Moriarty, then follows Sherlock pitch 2 and half of pitch 3, before going away out left and back right and continuing direct to the top.