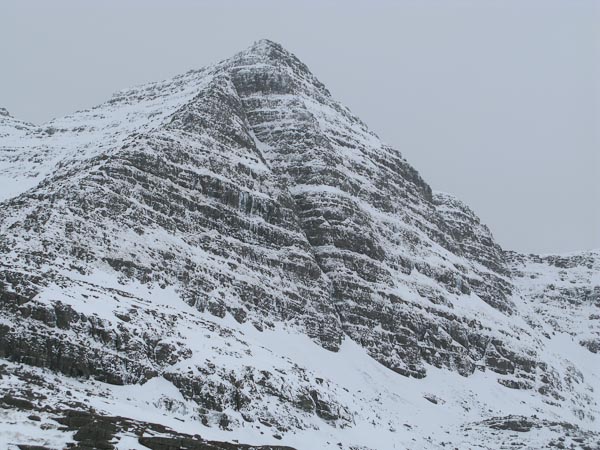 The North-West Face of the Horns of Alligin. The Waterhorse (VII,6) takes the prominent buttress in the centre of the photo. The deep gully to the left is the classic Diamond Fire (IV,4). (Photo Simon Richardson)

Roger Webb had mentioned to me a while back about a big unclimbed face on Beinn Alligin, so on Sunday February 28 we decided to take a look. We knew that Torridon had escaped much of the heavy snow that had swept across the country during the previous week so it was a sensible place to go. Roger’s unclimbed face was to the right of the classic gully Diamond Fire (IV,4) and involved a strenuous two and a half hour walk through deep drifts to reach the secluded coire above Toll nam Biast. We were rewarded with The Waterhorse (VII,6), a seven-pitch mixed route up the prominent buttress in the centre of the face that kept us guessing to the end.

Diamond Fire was climbed by Keith Milne and Bill Stephenson the same day.

Postscript: Today March 2, Roger returned to the coire with James Edwards and Andy Wardle. They started up steep ice well right of The Waterhorse and then trended left up the central depression to the top. Rather appropriately, they named their route The Christening (IV,4).