Posted on February 26, 2010 by Simon Richardson 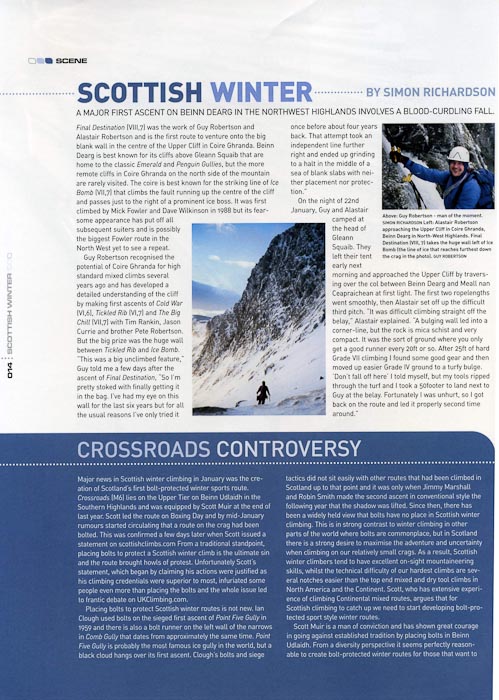 In 2005, the establishment of Crossroads, a bolted route on the lower tier of Beinn Udlaidh stirred up considerable controversy as this page from the May 2005 issue of Climb magazine shows. The bolts were subsequently taken out and Andy Turner has now put up Behind the Sun (VII,7), a traditional route meeting the full challenge of the wall.

On February 23, Andy Turner made the first ascent of Behind the Sun (VII,7) on the lower tier of Beinn Udlaidh. This gently overhanging line is based on a series of icicles that lead to an ice curtain leading through an overhang. Prior to this ascent Udlaidh’s lower tier had been almost completely ignored. The one exception was the bolted route Crossroads that was established in 2005. This route only had a limited life as the bolts were taken out a few months later. Andy’s ascent vindicates this action, as it is now clear that this very steep wall is capable of providing traditional winter routes for the talented and bold. I suspect Andy has rather undergraded the route – take a look at his blog for more details and photos andyturnerclimbing.blogspot.com

Also on Udlaidh, Greg Boswell and Tim Blakemore added The Grin (VI,7), a continental-looking line that starts to the left of the Smirk and climbs an ice bulge before traversing left to a hanging icicle. More details on Greg’s blog gregboswell.blogspot.com