Posted on February 25, 2010 by Simon Richardson 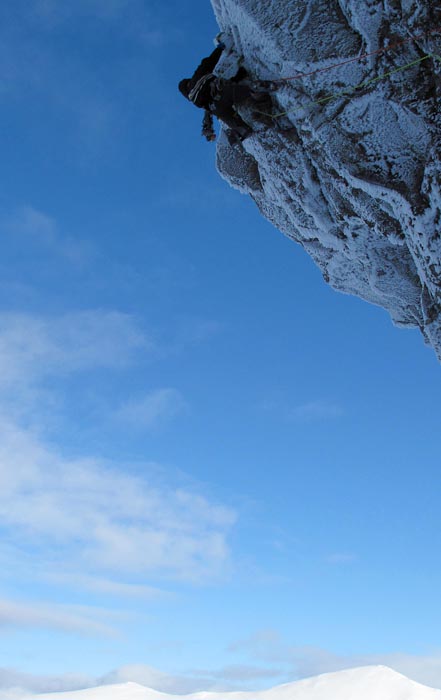 Dave MacLeod on his second attempt on Anubis in January 2010. This photo captures the extreme angle of the crux pitch. The route was graded Scottish XII and thought to be equivalent to M11 in technical difficulty. (Photo Andy Turner)

On February 20, Dave MacLeod stunned the winter climbing world with the first winter ascent of Anubis, a challenging summer E8 6c, high up on Ben Nevis.

Dave MacLeod made the first summer ascent of Anubis, which follows an intermittent crack-line running up to a huge roofed prow on the front face of The Comb in July 2005. He had dreamed of climbing it in winter ever since, and after completing his long-term project to free the nearby aided winter route Don’t Die of Ignorance (XI,11) in March 2008, he duly turned his attention to Anubis. Unlike Don’t Die, which took six attempts, Dave succeeded on Anubis on his third visit. After climbing the long crux section, which overhangs 12m over its 35m length, he tied his 70 metre ropes together and continued up icy grooves with the rope just clipped to the belay as a runner until he was on Grade IV ground. He then untied and soloed to the top.

Dave has suggested Anubis is Scottish XII and a full account can be read on his blog davemacleod.blogspot.com

Postscript 29th May 2010: Unfortunately when Dave climbed the route the crux section was not frosted white and many commented afterwards that the route was not in genuine winter condition. I disagree, and my argument about why this climb is a bona fide Scottish winter ascent was published in the May issue of Climb magazine.

Unfortunately, the first ascent photos of Anubis on MacLeod’s blog showed that the route was white except for the crux section that appeared black. Seasoned winter climbers know that staring at pictures on a computer screen is a poor way of judging conditions, and will have experienced the personal disappointment of taking photographs that fail to capture the winteriness of the day. MacLeod’s account of battling icy cracks, verglas and fighting to protect cracks choked with ice is a more telling assessment of the conditions, and his description of the climbing rings true for many high-end Scottish winter climbs. Throw in the fact that Anubis was climbed during one of the coldest periods of the coldest winter for fifty years on a big north-facing crag 3500ft up Ben Nevis, and it’s no surprise that the cream of today’s Scottish winter activists – Parnell, Robertson, Small – all firmly believe that this was a genuine winter ascent.

Some critics argued however, that Anubis failed to meet the MCofS guidelines that a Scottish winter ascent ‘should have a ‘winter’ appearance with snow, hoar frost, rime-ice or verglas covering the rock.’ As one of the architects of these guidelines – written some 15 years ago – I can state that they were not written for climbs like Anubis, which overhangs 12m over its 35m-long crux section. They were to provide guidance for vertical or off-vertical climbs and discourage quasi-winter ascents of routes with snow on ledges with otherwise dry rock. If we disallow Anubis on appearance grounds, we’ll have to wipe the slate clean on many other big Scottish first winter ascents including Grade IXs such as Sassenach and this year’s Super Rat, (see this month’s Scottish Winter Notes) that both feature climbing through roofs that didn’t have their undersides white with hoar frost.

The summer Anubis is not a classic summer route, and it may never see another repeat as a rock climb. The Comb is an out and out winter venue, and prior to Anubis, the last summer route added to the buttress was way back in 1940, so the assertion that Anubis will open the door for any other rock route to be climbed in winter does not ring true. There is a long tradition of climbing summer routes in winter conditions in Scotland, and some of the finest Scottish routes, from North-East Buttress and Eagle Ridge through to Unicorn and Sioux Wall, all happily co-exist in their summer and winter states. Winter climbers are continually striving to climb harder summer routes in winter. They always have, and they always will.

More importantly, Anubis opens a door to a new future for the world of winter climbing. The most outstanding feature of this ascent is that MacLeod embraced the full Scottish style and climbed M11 ground-up with leader placed protection. MacLeod has taken M-climbing tools and techniques and combined them with Scottish ethics to produce a climb that is quite unique across the world. We have just witnessed a quantum leap in the development of our sport. M-climbing will never be the same again and MacLeod can quite justifiably claim to have climbed the most difficult traditional mixed route in the world.”

Simon Richardson is a passionate Scottish winter climber
View all posts by Simon Richardson →
This entry was posted in New Routes and tagged Ben Nevis, Dave MacLeod. Bookmark the permalink.