Posted on February 24, 2010 by Simon Richardson 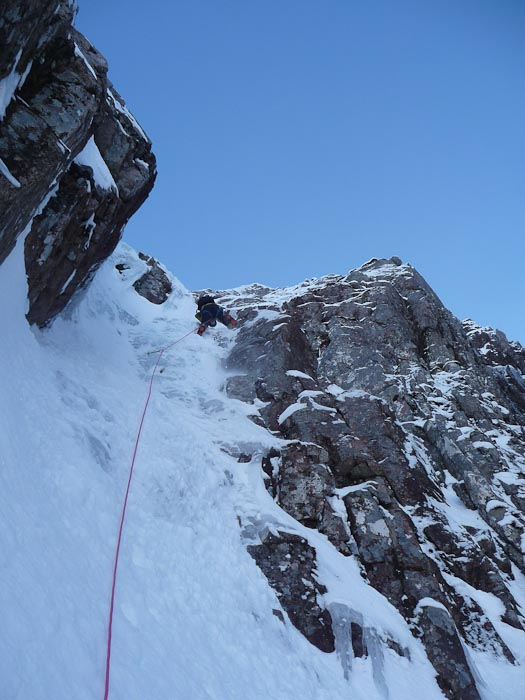 Andy Nisbet on the first ascent of Stingle (IV,5) in the remote Coire Dhomhnaill, Stob Gabhar in the Southern Highlands. (Photo Duncan Tunstall)

Andy Nisbet and Duncan Tunstall have had a great couple of days exploring Coire Dhomhnaill (Donald’s Corrie) on the north side of Stob Gabhar. The climbing potential of this remote cliff was first discovered by D.Stewart and N.Wightwick in April 2000 when they climbed The Great Divide (III), the deeply incised gully cutting through the central buttress of the cliff.

To the left of The Great Divide is a concave face with two fault lines – a groove line direct up its centre and one on the left which forms thicker ice. On February 19 the central groove-line gave Andy and Duncan the excellent 300m-long Donald’s Direct (IV,4) and they finished the day with Mystery Cleft (IV,5), the deep gully in the high bay up and left. Returning four days later with Chris Pasteur they added Clan Donald (IV,4), the companion left-hand fault to Donald’s Direct, and Stingle (IV,5), the icefall and ramp forming a ‘V’ with Mystery Cleft.