Posted on February 22, 2010 by Simon Richardson 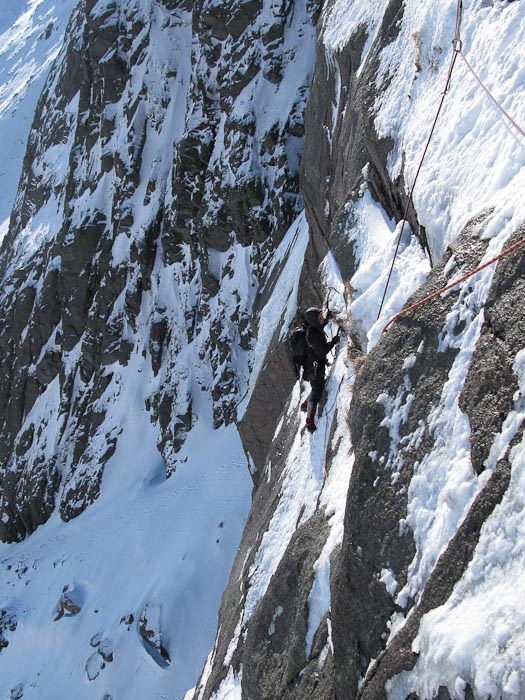 Iain Small on the first ascent of Danger Mouse, Creag an Dubh Loch. At VII,7 it provides the easiest way up the great front face of Central Gully Wall. (Photo Simon Richardson)

Dave Hesleden and I were so inspired by Ross Hewitt and Neil Morrison’s attempt on Mousetrap last weekend, that we tried a new line to its right on Wednesday February 16. Our route was based on the natural weakness of Mousetrap, Kraken, Waterkelpie Wall and King Rat but unfortunately we ground to a halt in the dark two-thirds the way up the face. A steep groove of unconsolidated snow, poor belay and no runners in sight were the recipe for a reluctant retreat.

I returned yesterday (Febraury 21) with Ian Small. We reclimbed the lower pitches and then continued up the upper pitches of Super Rat to the top. What a difference five days makes! This time, the cracks were clear of ice and the snow more consolidated.

We called the route Danger Mouse, and at VII,7 it is the easiest way up the front face of Central Gully Wall.

Postscript (March 1): Over the last few days, well known Cairngorms pioneers, Greg Strange and Andy Nisbet have both independently told me that they had also spotted a similar line to Danger Mouse up the face – as always in climbing, someone has thought about it before!