Posted on February 19, 2010 by Simon Richardson 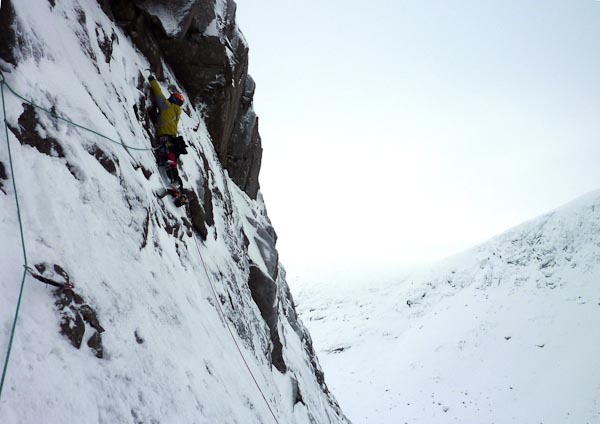 Pete MacPherson approaching the King Rat roof on an earlier attempt on Super Rat. The route was finally climbed on the third visit. (Photo Guy Robertson)

Super Rat (IX,9) is based on the summer E1 classic King Rat, but takes a more direct line following the crack system throughout. When I first heard about the project I was a little skeptical, because the rounded cracks of Central Gully Wall are not natural winter terrain. However the Super Rat ascent relied on a thin covering of ice and was an archtypical Scottish winter climb relying on precise conditions to make it climbable.

Congratulations to Guy and Pete for the most important new route of the season so far, and the first winter trip up the awe-inspiring Central Gully Wall for nearly 25 years.

Ross Hewitt was also successful on his rematch with Mousetrap yesterday, recording the third winter ascent with Tania Noakes.