Posted on February 28, 2020 by Simon Richardson 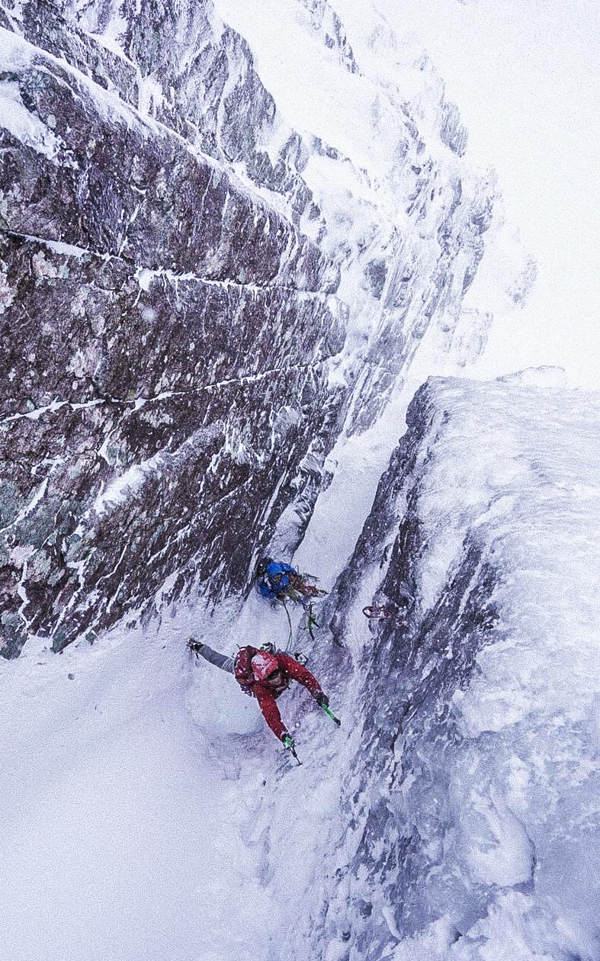 Looking down Minus One Gully (VI,6) on Ben Nevis. The Minus Face has been in rare excellent condition this week, and Minus One Gully, long considered the most difficult gully on the Ben, has been the most popular gully of the meet. (Photo Hamish Frost)

Heavy snowfall overnight on strong westerly winds resulted in dangerous windslab conditions on the fifth day of the International Meet (February 27). On Ben Nevis this confined teams to wind scoured cliffs such as the Minus Face, where the three Minus gullies saw multiple ascents. I took time out of my event coordinator role to team up with volunteers Stuart MacFarlane and Ian Dempster (who had carried food up to the hut) to make the first ascent of Superwoman (V,6). This takes a line if icy grooves up the previously unclimbed steep east flank of the Little Tower on Tower Ridge. Even though the route lies low in the mountain we had to tread very carefully to avoid setting off windslab that was lying precariously over smooth neve. The route was named after Carole Hawthorn who has kept everyone superbly fed and watered in the hut throughout the meet.

Andy Inglis and Maarten Van Haaren made and ascent of Central Grooves (VII,7) in Stob Coire nan Lochan, and Luca Celano, Carl Nystedt (Sweden), Nicolas Dieu, Michael Poulsen (Denmark) ploughed through deep snow on the Aonach Eagach traverse. Other Glen Coe based teams, headed to Creag an Socach above Bridge of Orchy, in search of less snowy conditions. Messiah had ascents from at least three teams, but the most notable climb was the third ascent of Defenders of the Faith (IX,9) by Peter Hoang and Neil Adams. This very steep mixed route was first climbed by Dave MacLeod and Fiona Murray in 2006, and was the first Scottish Grade IX to receive an on sight first ascent. A little to the south, Paul Headland, Kirsty Pallas and Neil Byrne (Ireland) made a ski ascent into Beinn Uhdlaidh and climbed the classic Quartzvein Scoop.

Further north, Rich Bentley, Seokju Woo (South Korea) and Neil Silver picked their way through a difficult avalanche-prone approach to make a rare ascent of Trespasser Buttress (IV,5) on Creag Meagaidh. Seokju, who has had a superb meet climbing several challenging routes, enjoyed the wild setting, and rated this his finest of the week. In the Cairngorms, The Message and Honeypot were climbed in Coire an t-Sneachda, and Andrew Marshall, Jakub Cejpek (Czech Republic) and Gwilym Lynn visited Hell’s Lum and climbed a very snowy Deep Cut Chimney.