Posted on February 27, 2020 by Simon Richardson 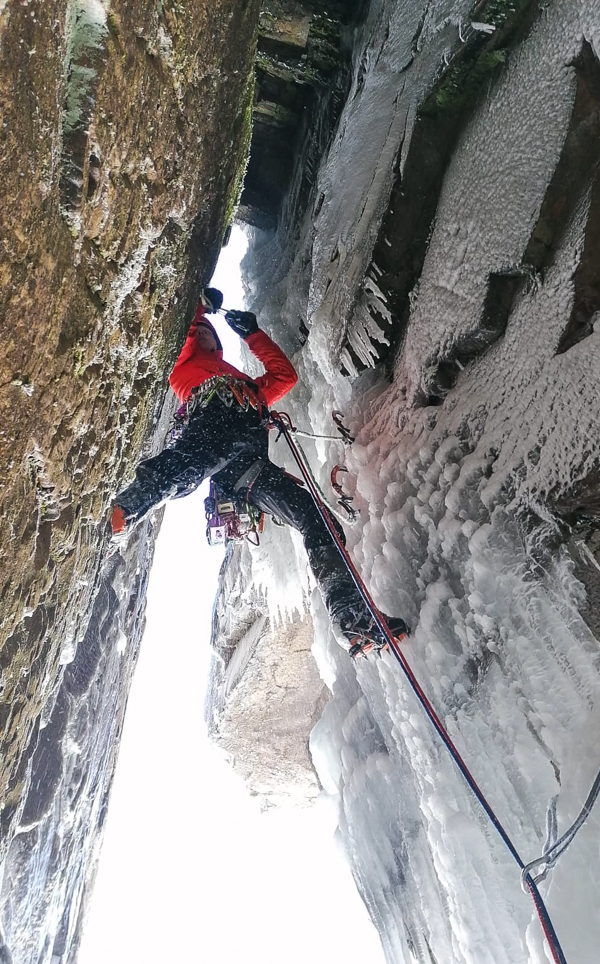 Rene Lisac from Croatia climbing Gully of the Gods (VI,6) on Beinn Bhan. Rene said afterwards that this was the finest route (of any description) that he had ever done. (Photo Scott Grosdanoff)

On February 26, the wind dropped and all eyes turned to Ben Nevis with close to 40 climbers from the International Meet active on the mountain. The standout performance came from Peter Hoang (Canada) and Neil Adams who made an ascent of The Shroud (VI,6) followed by Mega Route X (VI,6). Peter was keen to reach the summit of the Ben, so they continued up Jubilee Climb and circumnavigated Coire na Ciste to tag the summit before descending Coire Leis. The Shroud has not touched down and is currently a hanging ice fang. Peter used his extensive Canadian icefall experience to judge that this potentially very risky ascent was in safe condition. Even so, he rated the climb at WI6/WI6+ on the Canadian scale and commented that he had never climbed an icicle that did not hang vertically before – it had been blown sideways by the wind.

Mega Route X was also climbed by Murray Cutforth and Tom Phillips (Netherlands), and Gemini (VI,6), another highly sought after Ben Nevis classic, was climbed by Alex Mathie and Franz Friebel (Switzerland). Other routes climbed on the Ben include Boomer’s Requiem, Minus Two Gully, Minus Three Gully, The Curtain, Orion Direct, Platforms Rib and Route 2/Route 1 combination. CIC hut host Robin Clothier made a rare ascent of Right-Hand Route (VI,6) on Minus Two Buttress with Nicholas Wylie. This route also saw an ascent from Masa Sakano and Frano Udovic (Croatia).

Event Coordinator Al Todd, found time in his busy schedule to climb the classic Vanishing Gully with photographer Hamish Frost. Wadim Jablonski (Poland), Emily Ward and Alfie Maun abseiled off their route on the Douglas Boulder to assist a climber (not on the meet) who had been avalanched in Number Five Gully.

Further north, Scott Grosdanoff and Rene Lisac (Croatia) climbed Gully of the Gods (VI,6) on Beinn Bhan and Dave Almond and Trym Saelend (Norway) made the third ascent of Feast of the East (VIII,9) on the Eastern Ramparts of Beinn Eighe. Dave said that Trym, who is best known for the first ascent of The Corkscrew Route on Cerro Torre, was absolutely buzzing after the ascent.

In Stob Coire nan Locan in Glen Coe, Dorsal Arete, Raeburn’s Route and Twisting Grooves saw ascents, and on the Buachaille, North Buttress was climbed. Also in Glen Coe, John Higham took a break from resupplying the huts with food to make the first ascent of the350m-high Ephemeron Buttress (IV,4) to the left of Ephemeron Gully, with John Hutchinson.