Posted on February 25, 2020 by Simon Richardson 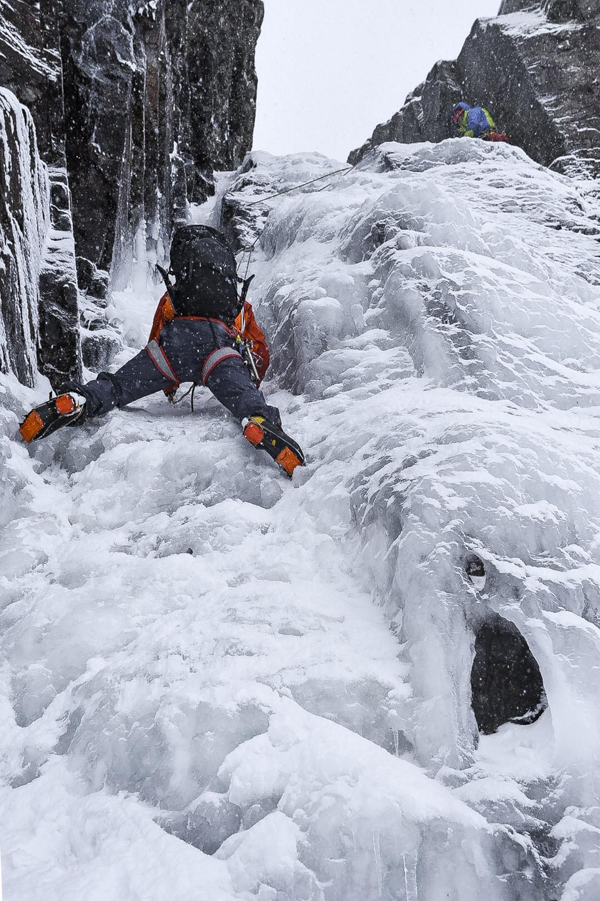 Waterfall Gully (IV,4) on Ben Nevis on Day 3 of the International Meet. The continuous run of February storms combined with a series of rapid freeze thaws have created excellent ice conditions all over the mountain. (Photo Marc Langley)

First of all, the big news from yesterday (February 24) was a new route on Minus Two Buttress on Ben Nevis by Maarten Van Haeren (Canada) and Andy Inglis. Calculus (VIII,8) takes a line directly through the overhangs that girdle the buttress at one-third height. Andy led the Grade VI entry pitch up icy grooves and Maarten pulled out the stops with a superb lead up a stepped corner through the overhang on tenuous hooks. Easier ground shared with Central Route (VI,7 with 2pa and unrepeated) led to the crest of North-East Buttress.

Ice conditions are excellent on the Ben at the moment, and this where the meet focused on day 3 (February 25). Minus One Gully had three ascents, and Callum Johnson and Lukas Klingora (Czech Republic) climbed it so quickly that they also had time for Minus Two Gully. Fresh from his success on Minus Two Buttress the day before, Maarten Van Haeren soloed Orion Direct in a two-hour round trip from the hut. Other ice routes climbed include Left-Hand Route, Waterfall Gully, Vanishing Gully, Thompson’s Route and Tower Ridge, which is ice from bottom to top.

The mixed routes in Coire na Ciste are very icy and in challenging condition. Dave Almond and Trym Saeland (Norway) made an ascent of Sioux Wall, and Rich Bentley and Seokju Woo (South Korea) climbed a very bold and icy Gargoyle Wall – only seven pieces of protection were found in five pitches! Mixed conditions were more amenable lower down the mountain and Neil Adams and Peter Hoang made an ascent of the rarely climbed Kellett’s North Wall Route (VII,7).

In Glen Coe, North Buttress on the Buachaille saw an ascent, and in Stob Coire nan Lochan, Scabbard Chimney, Crest Route and Chimney Route were climbed. Further south on Creag a Socach, Kick Start and The Glass Bead Game had a couple of ascents apiece, and on Beinn Eighe Central Buttress Direct was also climbed.

Several teams are heading north tomorrow, but the meet will continue to focus on Ben Nevis that has some of the best ice conditions for many years.