Posted on February 18, 2019 by Simon Richardson 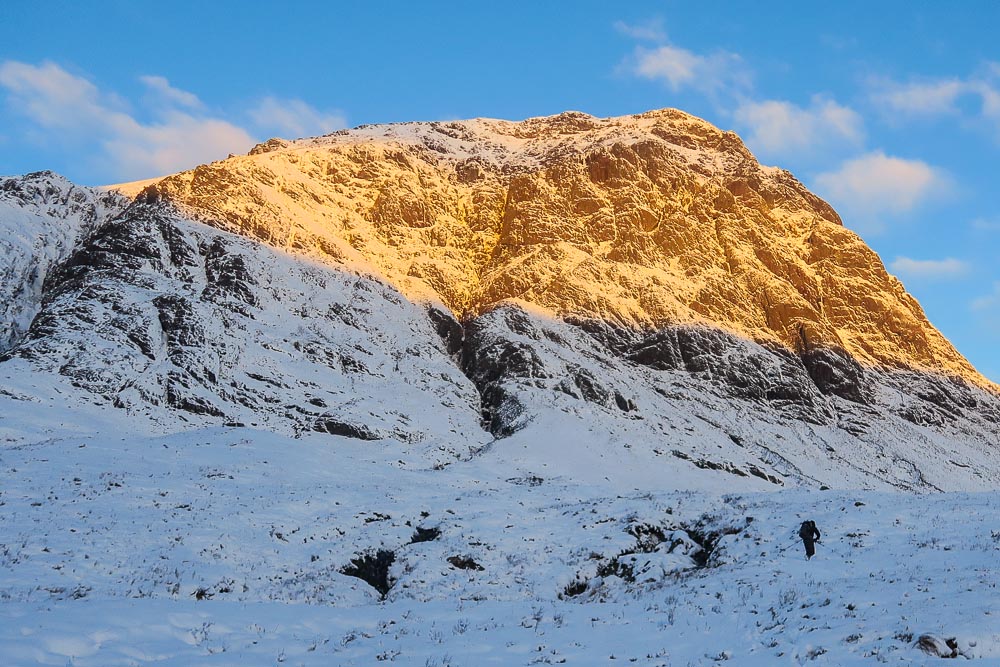 Iain Small approaching the South-East Face of Buachaille Etive Mor above Glen Etive. The prominent right-trending traverse line of The Chasm to Crowberry Traverse can be seen rising from the deep cleft of The Chasm on the left. The new VII,7 addition on North Blackmount Buttress is situated on the furthest right buttress above the traverse line, in a line below and left of the summit. (Photo Simon Richardson)

The heavy snowfall at the end of January fell without any wind and coated the Scottish mountains with a uniform layer of powder snow. This was a boon for skiers, but for classic winter climbing it needed to consolidate a little. Fortunately, the cold was intense, and soon permeated the fluffy light snow and rapidly froze the turf below. This combination of deep snow and frozen conditions created a brief window of opportunity on southerly aspects before the February sun started stripping it all.

On February 1, Iain Small and I were in Glen Coe and attracted to the idea of a winter route on the South-East Face of Buachaille Etive Mor. This myriad of buttresses and gullies is rarely visited in summer, and hardly ever in winter.

We hummed and hawed about exactly what to do and where to climb on the face, but after looking through binoculars Iain spotted a continuous line of white on the north-east flank of North Blackmount Buttress. Fortunately Iain knew the area well (although rather modestly he claimed he didn’t) as he had added a handful of new E4s and E5s on the face in recent summers. Most importantly, Iain knew that The Chasm to Crowberry Traverse, which was first climbed by Glover and Collinson in April 1898 and takes a rising traverse across the face, was the key to reaching our buttress.

Glover and Collinson’s route was one of the first climbs to be recorded on the Buachaille, and following its well-defined line up short gullies and terraces interspersed with short walls was a fulfilling outing in itself. Iain’s hunch that there was a good line on North Blackmount Buttress was correct, and we climbed three excellent sustained pitches with a bold crux through a difficult to protect roof at half-height. The route was sheltered from the sun, and the upper pitch following well-cracked grooves in an exposed position on the upper crest of the buttress was a delight. The party climbing Curved Ridge above and to our right must have wondered what route we were doing.

We coiled our ropes on the flat top of the buttress and then traversed across a snow slope before plunging down through deep powder on the upper part of The Chasm to Crowberry Traverse to regain our steps and the conclusion of a satisfying day.