Posted on February 14, 2019 by Simon Richardson 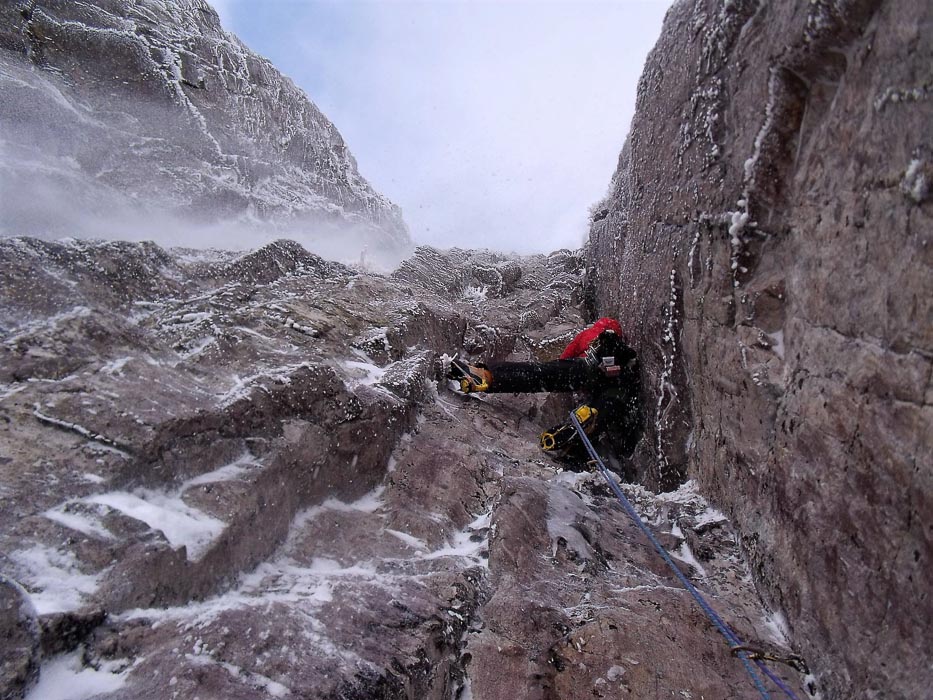 Murdoch Jamieson on the first ascent of One Man’s Mountain on the Far East Wall of Beinn Eighe. This sustained icy mixed route takes the prominent groove to the right of Vishnu. There is no confirmed grade at present but the route is thought to be in the VII,8 to VIII,8 range. (Photo Guy Robertson)

“Guy had tried it many years ago with Pete Macpherson but they bailed due to bad weather,” Murdoch told me. “We climbed it in two big pitches – 40m and 50m.  Guy’s first pitch follows some ledges, aiming for an obvious V-groove. This provided some cool climbing with thin feet in places and finishes with an awkward move right at a pinnacle.

My pitch follows the obvious corner above. It was very turfy and icy with several steep bulges and a little run out in places. But it had good turf, hooks and ice with a finish up a squeeze chimney.  Maybe we are both biased, but we think this is a great addition to the Far East Wall as it will regularly come into condition. The climbing is proper filthy icy mixed!

I must admit, I feel a bit empty writing this. Andy was straight on my case the minute I was off the hill after a new route wanting all the info.  Its saddens me that I did my usual and let him stew for a bit before I submitted the information. I always enjoyed our chats, and Andy’s knowledge of Beinn Eighe will probably never be matched.

Although Andy was always in contact straight away, Steve invariably made the first contact after I uploaded my photos to ‘Flickr’. We chatted on a regular basis, and I talked with him moments before Guy arrived at my house in Dingwall before our Shiva ascent. I voiced my concerns that I was scared. Guy has a strong reputation for opening up very hard new lines, but I had never climbed with him in winter before so felt some anxiety. After all, I am not Greg Boswell. However, Steve being positive and psyched for everyone, pointed out I was strong and nothing to worry about. I replied that I am p*** weak, but Steve’s response was that he wished he was as p*** weak as me and to get on with it.  Inevitably when I got home that night he was immediately in touch and psyched for me. That was Steve, through and through.”

Note: Guy and Murdoch’s route was originally called Shiva, but it was renamed One Man’s Mountain in memory of Andy Nisbet.