Posted on February 19, 2019 by Simon Richardson 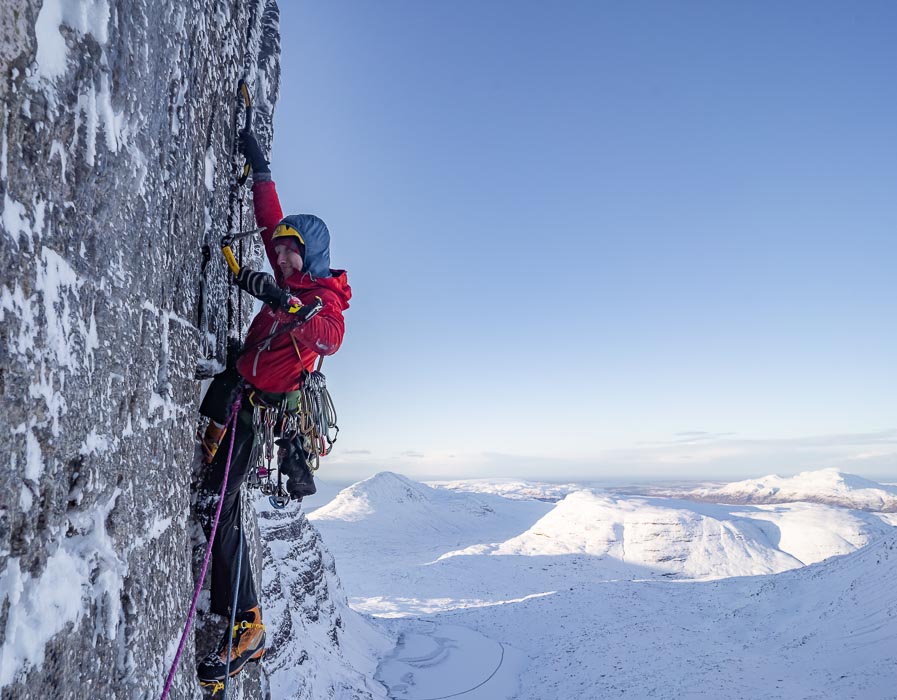 Murdoch Jamieson climbing the third pitch of Heavy Flak (VIII,8) on Beinn Eighe’s Eastern Ramparts during the first winter ascent. This spectacular route is one of the most difficult new additions this season. (Photo Uisdean Hawthorn)

Murdoch Jamieson and Uisdean Hawthorn pulled of a notable first winter ascent when they climbed Heavy Flak on Beinn Eighe on February 2. This summer E1 on the Eastern Ramparts was first climbed by Geoff Cohen and Murray Hamilton in July 1978.

“We climbed it in three pitches,” Murdoch told me. “I took the first pitch which ascends the right side of the roof to a little ledge. I think the summer description says traverse in from the right, which would make sense. Under the roof it was icy and dirty, and in summer I suspect it would be rather loose. It was a bit committing to leave this little ledge and gain the crack but I was fine once established. It was just pumpy.

Uisdean took us up the summer 5b pitch. It looked mental from below but this pitch was made for modern hooking with sinker hooks and good thin cracks for mono points. All that said, it was still very pumpy. The top pitch however was probably the crux. An icy wall with some very steep strenuous moves led to a groove.  I’m glad I’m tall as it was a long reach to the ice, but once in the groove the ice was fairly good. It was runout so maybe it felt harder than it should have done given the quality of the ice. Overall, we think the route was harder than Boggle, but probably still in the VIII,8 Grade.