Posted on February 20, 2019 by Simon Richardson 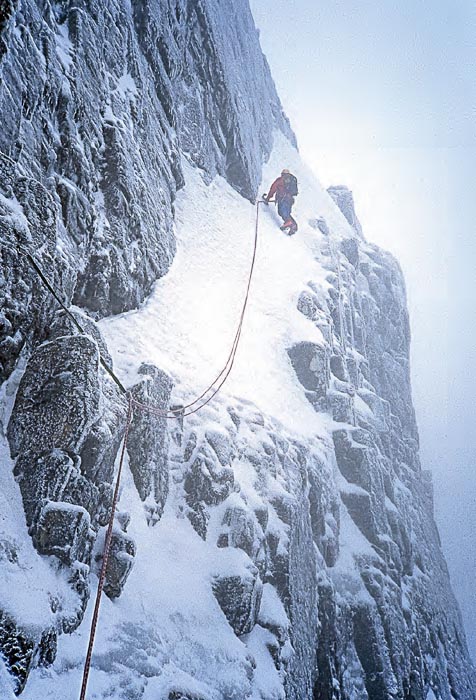 Alex Runciman on the exposed final pitch of Number Three Gully Buttress (III) on Ben Nevis. Alex was a keen attendee of the Scottish Mountaineering Club CIC Meets and had climbed many of the classic winter climbs on the mountain. (Photo Grahame Nicoll)

Grahame Nicoll’s atmospheric photograph of Alex Runciman perched above the misty void on Number Three Gully Buttress (III) on Ben Nevis is one of my favourite winter climbing images. It is no coincidence that it was published in both the 1994 SMC Ben Nevis guidebook and Chasing the Ephemeral.

Unfortunately after a short illness, Alex died earlier this month, and Scottish winter climbing lost one of its most enthusiastic devotees. Alex was a joiner by profession, but his lifelong love of the outdoors led him to found a series of outdoor shops in Scotland. The first was the iconic Mountain Man Supplies in his hometown of Perth, which led to further shops in Ullapool, Aviemore and Braemar. The early success of the business was attributed to Alex’s unbounded enthusiasm – it was said that you would go into his shop to buy a pair of socks but inspired by Alex’s passion for the mountains you would leave with a full set of kit!

Alex was a Scottish mountaineer through and through. He completed three rounds of the Munros and climbed many of Scotland’s winter classics. He was particularly fond of climbing on Ben Nevis where his joinery skills were used to fit new windows in the CIC Hut – a major job. Alex also developed a liking for climbing in the Southern Cairngorms and particularly on Beinn a’Bhuird. He added several new routes to Coire an Dubh Lochain and Dividing Buttress, but the only one that is recorded is the first winter ascent of Tearaway (IV,3). For Alex it was all about being in the mountains rather than personal glory.

Grahame Nicoll climbed often with Alex in the 1990s and recalls many great days together. “I remember seeing Alex in the shop one Christmas Eve, conditions were good and he was itching to get out, however being very much a family man with three young daughters we had to wait until Boxing Day. We went to Meagaidh, had the corrie to ourselves, and did North Post. We topped out to see a fantastic sunset and a full moon rising. Alex was ecstatic and there was much whooping as we glissaded off the hill.”

Alex was a generous man and took great interest in the routes Chris Cartwright and I were climbing in the early 2000s. He kitted us out for a remote expedition to Canada, and on another occasion Chris turned up below Ben Cruachan with a cardboard box with a set of brand new ice tools for us each. Alex said he liked what we were doing and wanted to contribute, if only in a small way. But my abiding memories of Alex are his broad smile, bright eyes, and infectious enthusiasm. The Scottish hills are all the less for his passing.

Simon Richardson is a passionate Scottish winter climber
View all posts by Simon Richardson →
This entry was posted in Commentary and tagged Alex Runciman. Bookmark the permalink.