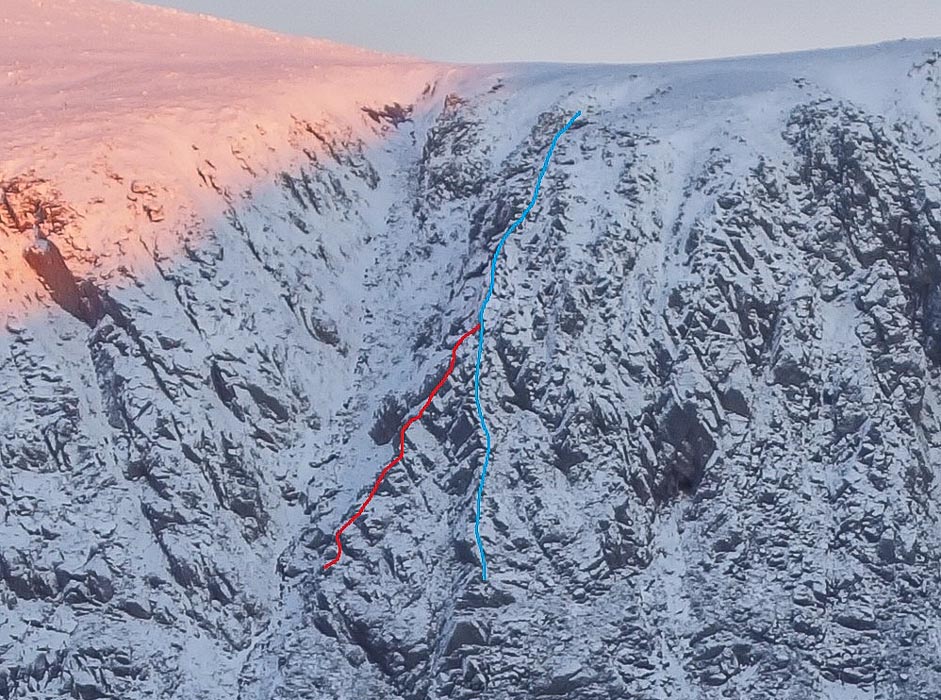 The prominent line of Neverthought Arête (III,4) on Stag Rocks on Cairn Gorm is marked in red. It was climbed back in November and rather surprisingly does not appear to have been recorded before. The classic Afterthought Arête (III) follows the blue line. (Photo Graham Wyllie)

Without question, it has been a dismal Scottish winter season. The warm weather through most of the peak winter climbing period in February upset many people’s dreams, and the tragic loss of Andy Nisbet and Steve Perry coupled with the recent fatalities in Glen Coe and Ben Nevis has only made things worse. The wind has been taken out of many people’s sails, and the current stormy weather giving rise to dangerous avalanche conditions is just adding to the gloom.

I received an email the other day from Graham Wyllie about a possible new start to Afterthought Arête on Stag Rocks that helped to lift my spirits.

“Ryan Alexander and I went in for a look at Stag Rocks on November 18 and decided to go down the Y-shaped gully and onto Afterthought Arête,” Graham told me. “Without looking at the guidebook we headed up the first arête from the gully’s lower reaches. I realised this was a different line a couple of weeks ago while belaying on the Shelter Stone and seeing parties on an ascent of Afterthought Arête well to the right of where we climbed. I led the route, but it was only Ryan’s second winter climb, so it was a good effort from him.”

The route is such an obvious line that it is surprising it has not been recorded before. New ascents in plain sight such as this make me smile, as it seems incredible that nobody has been there before. John Lyall, who knows the crag well, agrees that there is no record of an ascent, but wonders whether it was not noted before because it is escapable into the gully on the left. This is a real possibility, but there again, folk are climbing routes in leaner conditions nowadays which tends to make lines more distinct. So if anyone has climbed the line before, please get in touch (email or add a comment) so we can set the record straight.

Graham and Ryan have provisionally called their new addition Neverthought Arête and graded it III,4.