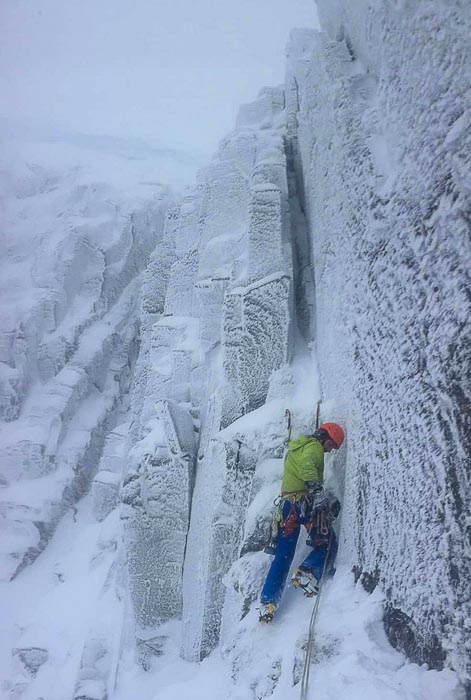 Graham Wyllie at the base of the chimney during the first ascent of Moonpig (IV,5) on Aonach Mor. This route climbs the left flank of the buttress containing Foosyerneeps. (Photo Cam Bevan)

Strong winds and frequent snowfall have resulted some very dangerous snow conditions recently, especially on the West. On March 8, Graham Wyllie and Cam Bevan visited Coire an Lochain on Aonach Mor. Conditions were tricky, but careful route choice meant they came away with a good two-pitch new route called Moonpig (IV,5) on the right side of the corrie.

“We approached via the climbers col to have a look at Grooved Arête,” Graham told me. “But avalanche conditions meant that traversing the apron below the crag was a no-go. The buttress that holds Foosyerneeps looked like a safe option in the conditions so we headed up there. We had not taken a guidebook and only had descriptions of the routes we couldn’t reach so we decided to wing it and see what we found. We climbed an interesting and varied route on the left of the buttress that included a narrow chimney. Checking the guidebook later the route we climbed didn’t resemble Foosyerneeps at all, which stays on the right.”