Feast of the East – Second Ascent 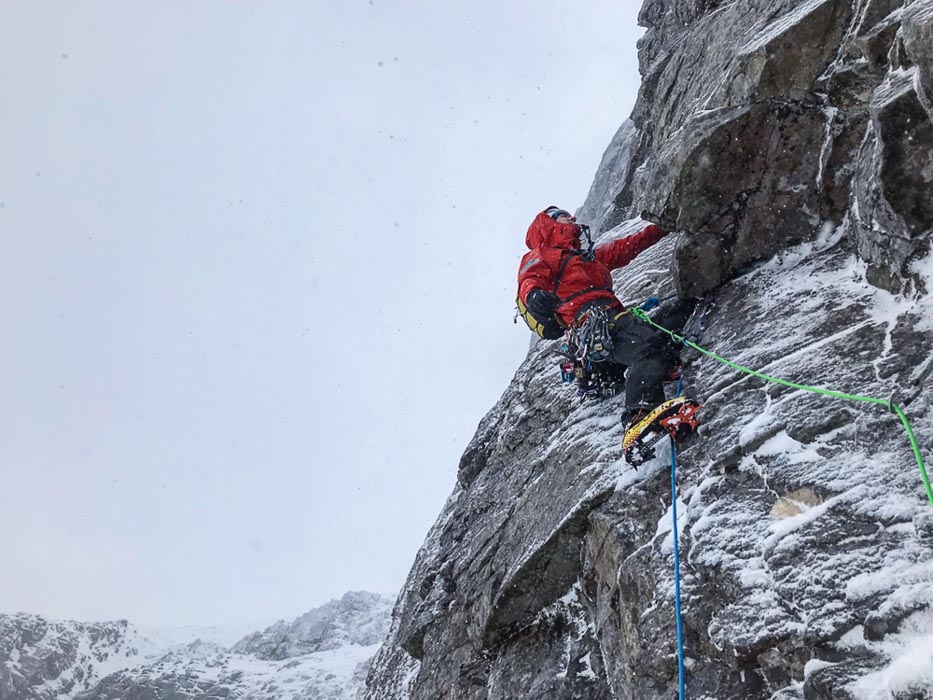 Matt Glenn on the second ascent of Feast of the East (VIII,9) on the Eastern Ramparts of Beinn Eighe. The demanding and technical route was first climbed in winter by Martin Moran, Murdoch Jamieson and Francis Blunt in December 20111. (Photo Jamie Skelton)

On March 16, Jamie Skelton and Matt Glenn made the second winter ascent of Feast of the East (VIII,9) on the Eastern Ramparts on Beinn Eighe. The route was first climbed by Andy Nisbet and Gill Ollerhead in May 1992, and the first winter ascent fell to Martin Moran, Murdoch Jamieson and Francis Blunt in December 2011.

“Myself and my friend Matt Glenn got pretty excited after reading about Heavy Flak and Shiva getting done recently and started scanning for other routes in the same area,” Jamie told me. “We decided to have a go at Feast of the East which is a four-pitch route on the Eastern Ramparts. We found some really steep but positive climbing through well-defined cracks and corners.

I lost the game of rock-paper-scissors so Matt went first. Initially the first half of the first pitch went well with gear and big hooks. After that there was a delicate section to negotiate, to get around a small projecting roof as for the summer route, first to the right, and then back left on flat ledges. This then led onto the big ledge below the main event – the pitch off the ledge is a summer 5c – it’s short and packs a punch. It follows a right-facing corner, which passes two large roofs on small positive hooks and good gear, however it is void of any really footholds making for an extremely strenuous series of footless pulls (possibly soft tech 9) to gain the small ledge.

Above lay another pitch the summer 5b that proved tricky being iced. It follows the same crack line with some rests in some pods to belay on the next big ledge. The last pitch involved a wild step straight off the belay. Moving around the right arête away from the belay and onto a big hanging slab led to bomber placements with much exposure up to easier ground. Overall, it is a superb route, one of the most enjoyable I’ve done”

Jamie and Matt have had a very successful season with ascents of Ventricle (VII,8), Darth Vader (VII,7), Sioux Wall (VIII,8) and the second ascent of Shapeshifter (VIII,8). In addition, Jamie has made ascents of Daddy Longlegs (VIII,9) with Jack Morris, and the hard test pieces of The Needle (VIII,8) and Centurion (VIII,8) with Tim Miller. Given the difficult season we have had this is a remarkable collection of routes!