Posted on December 29, 2014 by Simon Richardson 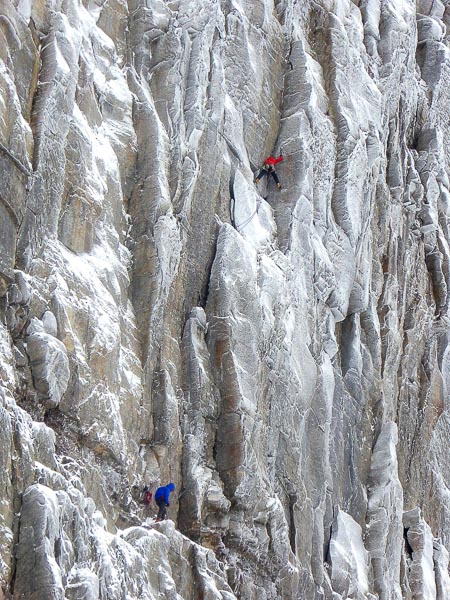 When I saw Mairi Ri’s beautiful photo of Uisdean Hawthorn and Murdoch Jamieson repeating Boggle (VIII,8) on December 26 I wanted to put it on scottishwinter.com as soon as possible. But Uisdean has been so busy on the hill I only caught up with him today. Boggle only saw its first winter ascent in the hands of Martin Moran and Robin Thomas less than two weeks before, so this is an unusually quick repeat of a major route.

“Boggle is a really good route, particularly the top two pitches,” Uisdean told me. “It’s steep and sustained, but positive climbing and good gear. I can see it becoming really popular. We even managed to get back to the car just before darkness. Thanks to Murdo dispatching the long hard middle pitch in under an hour!”

Uisdean drove home to Glenelg that night, and next day he linked up with Callum Johnson and climbed Point Five Gully on the Ben. Uisdean’s father Doug was also on Ben Nevis that day, and back at the CIC Hut he showed the pair some misty photos of the Little Brenva Face that showed that the icefall of Super G (VI,6) was possibly formed. This ephemeral route has probably not had a second ascent since it was first climbed by Hannah Burrows-Smith and Dave McGimpsey in March 2002. “So on Sunday morning (December 28) we took the chance of soloing up to the bottom to see if it was in,” Uisdean explained. “When we got there we thought it looked thin but just climbable so we climbed it in two fantastic 60 metre ice pitches leaving us grinning from ear to ear at the top of North-East Buttress. We climbed Zero Gully this morning as Callum had to catch the ferry to Arran, to finish a fantastic four days climbing!”

One Response to Boggle and More…