Posted on December 24, 2014 by Simon Richardson 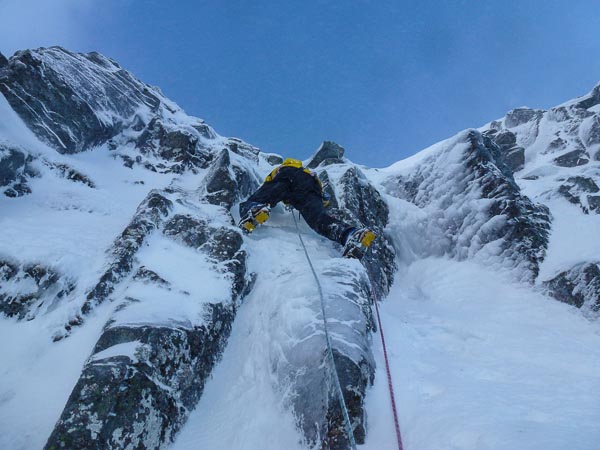 Jonathan Preston making the first ascent of Gonzo (IV,4) in Coire an Lochain on the East Face of Aonach Mor. The route lies on the Ribbed Walls in the area of grooves between Pernille and Aquafresh. (Photo Andy Nisbet)

“Coire an Lochain of Aonach Mor usually ranks with the Northern Corries as the place with most popularity and publicity,” Andy Nisbet writes. “But in recent weeks it has been ominously quiet; the assumption that it would have been swamped with powder after lots of westerlies was probably right. But then there was a big thaw, rain and floods, and a freeze again, so where else to go? A nice picture of an icy Ben on the SAIS blog confirmed my thoughts.

The big snag about December is that the Gondola often doesn’t run, and on December 23 it was scheduled for electrical maintenance, so we were psyched up for walking from the bottom. It was a big surprise when we arrived at 8.15am and it was running. Too late, we were told, it’s about to close and won’t open until 10am, or maybe later. It didn’t help that it was raining on and off, but Jonathan (Preston) had seen a forecast that said it would stop by 10, so we set off through the forest. Just before its top, at about 9.30, the rain came on heavier so we hid under a tree until it stopped, and sure enough the hill came out of the mist at 10am.

Then we sheltered behind the Gondola station to eat, and there was still every reason to think conditions would be good. After a while we set off up the piste and the snow gradually firmed up. First we saw footprints (that must be Simon ahead of us!) then ski tracks, which were puzzling until Jonathan saw pole marks and realised someone, had skinned up. At the top of the lift, we met Davie the liftie and were invited into the hut to warm up and chat; apparently the tow would be opening. After a while we forced ourselves to leave; there was still no reason why conditions wouldn’t be good.

Time was getting on but there really wasn’t a rush, as we geared up behind a hut at the top. The earlier rain had put down some fresh snow so were we concerned about windslab even though the plateau was bare ice. And of course cornices, as the intended line went up to some of the biggest on the cliff. Easy Gully was slightly worrying until we downclimbed into soft snow with not a hint of anything sliding under our feet. The East Face was so different, deep snow everywhere, like the depths of winter. We waded across to our line, in the snowy area about 100m left (looking down) of Easy Gully. Looking up, there was thick ice in every groove, probably the best conditions I’ve ever seen on that section of face, but still a cornice, which did look rather big.

Despite the wading, and the worry about falling into a bergshrund, as soon as we hit the steeper ground on the cliff, every placement was bomber. I had taken my ice gear in optimistic anticipation, even a couple of ice screws, but I maybe should have been more openly enthusiastic, as Jonathan was expecting mixed and had the bluntest crampons known to mankind. At least the grade was a comfortable one for us and a couple of pitches of icy grooves led to the cornice. Once we got the scale right, it didn’t look too big, but the 20m of near vertical snow I had climbed on the nearby route The Muppet Show (named modestly by my clients on the day, who were actually good climbers), would stay as a nightmare memory for many years. So I tried to reach it direct and backed off, then headed towards a break well to the right where Hidden Pinnacle Gully finishes, before quickly realising that the cornice wasn’t that big and the snow here was better. After a couple of failed attempts, I got a good ice screw under the cornice and with a long reach, could just get my axe in the lip. It was as expected, as solid as the snow on the plateau, so a belly flop and it was all over.

An hour later with some mechanical help and we were at the car, still in daylight. We hadn’t seen any other climbers, or walkers, and despite Davie’s efforts getting the tow open, not a single skier either. It was great. The route got called Gonzo, although the grumpy old men were pretty happy, and maybe it just scraped a IV,4 grade.”