Silver Threads Among The Gold

Posted on December 23, 2014 by Simon Richardson 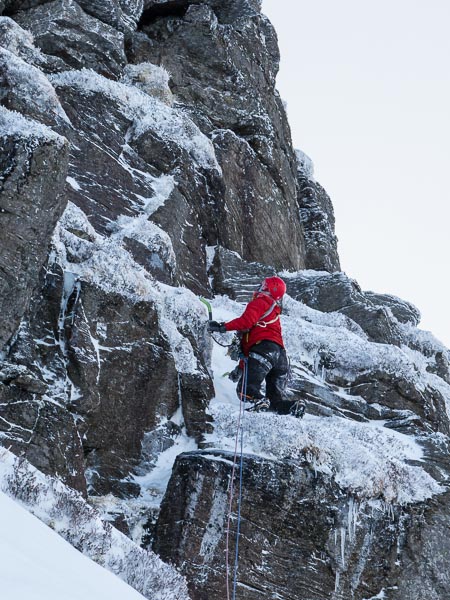 Henning Wackerhage moving up to the turfy headwall of Silver Threads Among the Gold (IV,5) on the first ascent. This 150m-long mixed route is located in Coire Farchal which lies just south of Winter Corrie on Driesh. (Archive Photo Simon Richardson)

Last week’s thaw never made it as far as the North-East of Scotland. I know this only too well as I fell off my bike twice whilst cycling to work on icy roads. As a result, Glen Clova was a good choice on Saturday December 20, and the cliffs were surprisingly wintry and white with fresh snow.

The most significant event was the first Wackerhage-free ascent of Silver Threads Among the Gold (IV,5) in Coire Farchal by Martin Holland, Ian McIntosh and Sharon Wright. Henning Wackerhage has climbed this route twice since making the first ascent in March 2013, and has established it as a good early season option. “There are plenty of chimneys, technical walls, a cave and some variation,” Henning recounted on his blog after this season’s ascent. “It is arguably the best buttress climb in the Angus Glens.” The route certainly has one of the most evocative names in the area, courtesy of fellow first ascensionist Tim Chappell.

Martin, Ian and Sharon added an alternative start up the short corner directly below the cliff, but were unable to climb the headwall due to an unusually deep layer of crusty snow, so they sensibly traversed right and finished up the top section of Pearls Before Swine.

The same day, I climbed a short Grade III buttress in Coire Bonhard with my son Ben. Recording of routes in this corrie has been a little haphazard over the years, but even so, I was a little surprised to find a skilfully placed knotted sling and karabiner at the top of our first pitch that looked as though it had been used for retreat. It was possibly a relic from the first ascent of Bonhard Buttress (IV,4) by S.Cameron and A.Thomson in 1992, but their description in SMCJ 2008 is rather vague. Andy Nisbet helpfully sent me the photo that accompanied the description, but I’ve had difficulty in relating it to the crag itself.

So if anyone knows the origin of the knotted sling, or the location of Bonhard Buttress, then please get in touch.

6 Responses to Silver Threads Among The Gold