Posted on December 22, 2014 by Simon Richardson 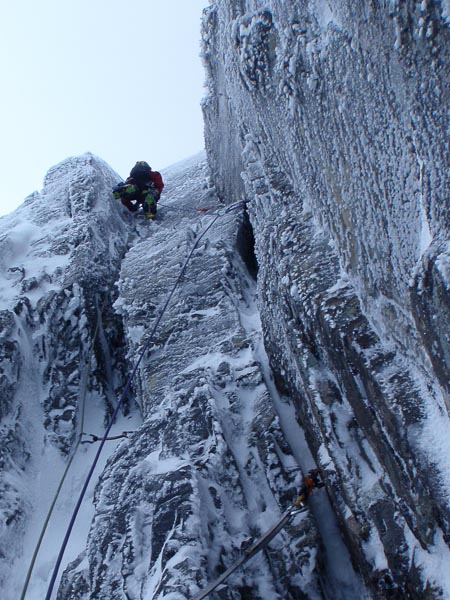 With the late start to the season, high standard ascents have been quite rare so far this winter, so I was delighted to hear that Dave Almond and Graham Dawson made an ascent of The Secret (VIII,9) on Ben Nevis last week. “It’s been a long wait for the season to start,” Dave explained. “So I used the time to its maximum to pack in some extra dry tooling sessions in Wales.”

“With a reasonably cold forecast a contingent of Scousers from Liverpool headed up with high hopes,” Dave continued. “Saturday I ended up trying to get up a route using every variation but the right one. Defeated I retreated to the valley with all the usual mind games going on in my head. Sunday the weather was disgustingly warm, windy and wet which left me ever more time to ponder. On Monday December 15, despite a nasty forecast, Simon Frost and I had the joy of breaking a new trail in the fresh deep powder up to Stob Coire nan Lochan and were rewarded with a windless, sunny day and a lovely ascent of Inclination (VII,8). I felt soothed.

Tuesday was another warm, wet and windy day and I took the chance to rest. On Wednesday December 17 I met up with Graham Dawson who had accepted my invite to have a look at The Secret despite it being a few grades harder than his norm. Another trail breaking session ensued giving plenty of time for self-doubt. I had previously climbed the first pitch two years ago but escaped up the Cornucopia finish due to lack of daylight. The Secret looked a fair bit whiter than the last time. Could I protect it?

There was no time to delay as the walk in had eaten up time, I cracked on and must say that first pitch is really excellent climbing. Graham followed up incredibly fast giving me a little leeway for the second pitch. From the belay, the top pitch looked like an iced up crack line that I doubted would take cams. As I made progress I realised I was correct and it was difficult to get nuts to settle in the flaring verglas. Lots of deep breathing and I made it past the first difficult section to some small ledges that I thought I could get a rest on. Maybe I let my concentration go a second, as I felt quite solid when my right axe ripped and off I went all the way to stop beneath Graham.

The light was starting to dim and I asked Graham if he was ok for me to have a last go. ‘Yes’ was the answer and off I went with a bit more haste and a lot more speed. The second pitch is good sustained climbing and I topped out on a large block just short of the cornice. Graham followed me up in increasingly poor light and heavy spindrift and continued up over the cornice in to a nasty storm.

I was absolutely delighted to have been able to climb this route. Thanks to Graham for his patience. Maybe the tooling sessions paid off after all!”