Posted on December 21, 2014 by Simon Richardson 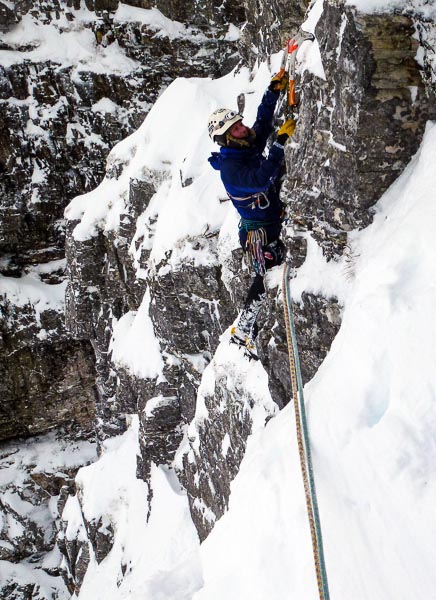 Steve Perry on the first ascent of Flying Saucer (VI,7) on Stob Ban. The route follows the line of North Ridge Route that is incorrectly marked in the SMC Ben Nevis guidebook. (Photo Andy Nisbet)

Andy Nisbet and Steve Perry added an excellent new route to Stob Ban in the Mamores on December 16.

“It’s hard to know where to go at this time of year,” Andy writes. “Actually it’s easy if you have a free choice, but if you’re like me, then it has to be a new route, not too hard and suitably frozen. You could add to my requirements ‘not too long a walk’ also, so this makes it tricky compared to new Grade VIIs or VIIIs many miles from the road, of which there are many. So after a long contemplation and a lucky picture on someone’s blog, which looked like most of the soft snow had melted, I suggested Stob Ban to Steve Perry.

We set off in the early morning gloom and it wasn’t long before I realised that unlike the Cairngorms, none of the powder high up had melted. So my bright idea turned into wading through soft snow and an expectation that the turf would be insulated. It took about three hours to get to the crag, shortened by Steve helping the old man and carrying both ropes. The best unclimbed line on the South Buttress is a big turfy trough which narrows down into a steepening groove before ending in a gently overhanging smooth wall which never seems to form solid ice. Fortunately the line is shown as being a route in the Ben Nevis guide, which maybe explains its lack of attention. Or maybe the climbing world is full of purists waiting for the magical day when the ice is complete.

After an arduous wade (for Steve) up the approach slopes, without a hint of anything being frozen, I was really quite surprised to see lots of ice. I shouldn’t have been, since it’s been a wet autumn and cold for a few days, but I was in a pessimistic mood. That was until I dug through soft snow down to the cliff base and reached turf which seemed to take a pull on an axe, although fully frozen would have been an optimistic assessment. But the climb was on!

The direct line was quite icy but a bit off being climbable (and a long way off being climbable by us), so we started up to the left side. This is the same start as a 2010 route called Tippy Toe, but we soon diverged and gained a turf ledge level with the top of the overhanging wall. It wasn’t a very wide ledge and piled high with soft snow that had a tendency to collapse, causing your heart to miss a beat until you landed on the turf underneath. After about 10m, rope drag and 50m out meant that it was time to belay, although the poorly cracked rock caused some anxiety until an unexpected nut relieved some of it.

The next pitch would be the crux and really depended on the quality of the ice, which could have been anything from solid to mush. An easy traverse and a solid swing of the axe immediately indicated that this was worth a go. The ice was variable in depth, good enough to climb but it meant you wouldn’t be coming back down, other than as a flying saucer. Which does focus the mind on success. After a couple of steep moves, a step left gave a rest and search for a runner. It was the common dilemma of whether you chip away the ice hoping for a crack or leave it thicker for climbing. But just as I was getting concerned, I tried on the left and there was one. The next section looked like the crux, a balancy ramp with ice blobs followed by a small roof and white above, which could either be a blank slab or nice turf.

I’m not actually sure what it was, but it took axes and was over quickly once you committed yourself. The continuation was a mixture of good placements and soft ones, but progress was made as long as you didn’t pull too hard, and finally the base of the trough was reached. The trough was better frozen and more enjoyable, followed by a long pitch up the summit crest and moving together to the cairn. Steve could tick this one on his third round, whereas I was in my usual hurry to carry on down ahead of imminent mist and darkness.

South Gully gave a brilliant long bum slide back to the sacks, a bite to eat and then more sliding. The name had to be Flying Saucer and the grade felt like VI,5. It might drop a grade in better conditions, but actually the conditions were OK.”