Posted on December 19, 2014 by Simon Richardson 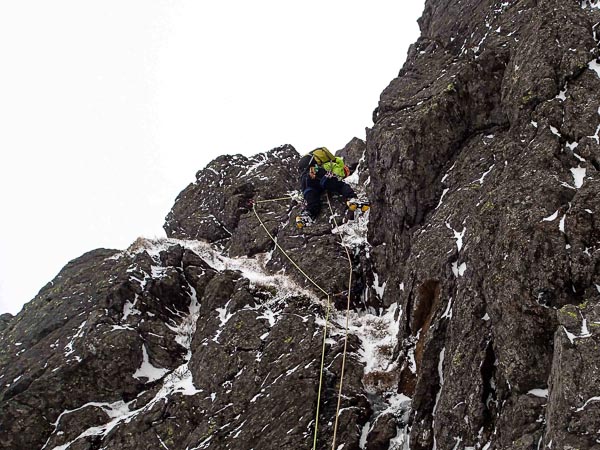 “Whilst not quite in the same league as Boggle or Culloden,” Iain Young writes, “John Higham and I enjoyed a fine (civilised, sunny and short) day out in Clova on Saturday December 13.

With all ways west and north-west out of Aboyne apparently suffering from closed snow gates, and thinking Lochnagar or Beinn a’Bhuird would be very hard work, we decided to try Corrie Brandy. However on the way in we changed our minds and headed into the Corrie of Clova to climb one of the two attractive ribs catching the morning sun. Three short pitches, with the crux a surprisingly steep, (well frozen) turf-filled groove cutting through the final tower – Boustie Buttress (III,4).

John of course at some stage remembered he had actually been in there 15 years before and soloed the rib to the right…  Home in time for a cold beer and an early meal. The Angus Glens are surprisingly varied.”