Posted on December 17, 2014 by Simon Richardson 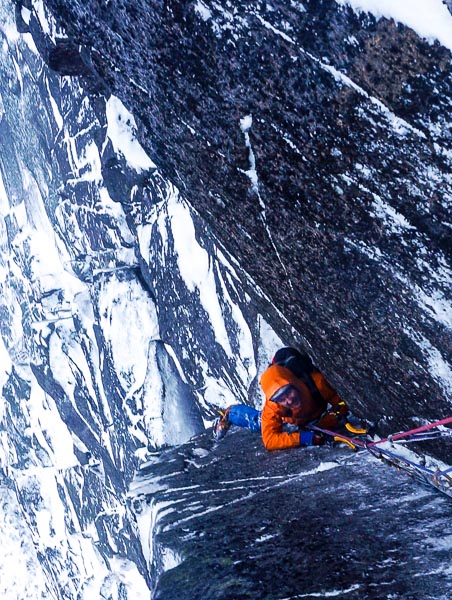 Guy Robertson climbing the crucial second pitch of Culloden (IX,9) on Creag an Dubh Loch during the second winter ascent. This sensational mixed route was one of the first Grade IX routes in Scotland to receive an on sight first winter ascent. (Photo Greg Boswell)

On Saturday December 13, Guy Robertson and Greg Boswell pulled off the second ascent of Culloden (IX,9) on Creag an Dubh Loch’s formidable Broad Terrace Wall. This exceptionally steep summer E2 was first climbed in winter by the top trio of Iain Small, Gordon Lennox and Tony Stone in December 2010.

“We swithered a bit over route choice but in the end Culloden seemed sensible,” Guy told me. “Firstly because it’s such a great line which came highly recommended by three of the country’s best winter climbers, and secondly because it only has three pitches and we might just be able to get up it in daylight! Every pitch provided superb climbing – the first very long and sustained but not too difficult, the second shorter but very strenuous and aggressive, and the third a steep, complex and very committing finale. Overall, solid at grade IX was our consensus. The icicle was there for the technical crux getting into the groove on pitch two, and although Greg knocked this off the remaining ice was useful nonetheless. Like all the most memorable days our ascent wasn’t without incident – on the third pitch, in a rather ‘strung out’ predicament I managed to get my axe firmly jammed in the only good placement for pick or protection. After some protracted and very precarious but wholly ineffective wriggling and jiggling to try and get it out I gave up, clipped it as a decent runner and lowered a loop of rope down to Greg to get a loan of one of his axes. The vicious bulge and fist crack above were then duly dispatched just in time to catch the last rays of a dying day…”

I was intrigued as to how Guy and Greg came to make the inspired choice of Creag an Dubh Loch for their first route of the season. After all, Dubh Loch is normally thought of a cliff that takes a long period of cold weather to come into condition.

“Our main reason for going to the Dubh Loch was simply that it’s the best crag in Britain!” Guy joked. “Seriously though, there are lots of different options and styles there, and it rarely disappoints. It’s been a very wet couple of months in the east so the chances of ice were quite favourable; the low altitude meant that deep snow (at least on the crag) should be less of a concern; and the forecast was better for this side of the country with a warm front moving in late in the day. Broad Terrace Wall is also exceptionally steep so the turf more likely to be exposed and well frozen. As it turned out it was a great choice with a very snowy and icy (though not rimed) cliff and an approach that wasn’t too strenuous despite still taking about four hours in all. A night in the bothy helps to break up the approach though.”

Simon Richardson is a passionate Scottish winter climber
View all posts by Simon Richardson →
This entry was posted in Repeats and tagged Creag an Dubh Loch, Greg Boswell, Guy Robertson. Bookmark the permalink.