Posted on December 16, 2014 by Simon Richardson 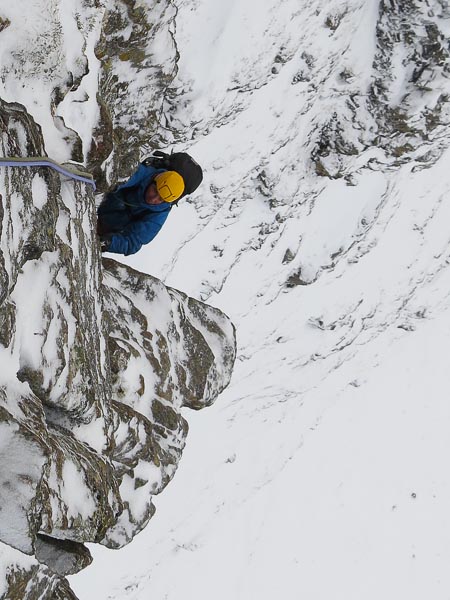 Roger Webb climbing the headwall on the North-West Buttress (IV,4) of Beinn a’Mhuinidh. This is probably the first route to be climbed on the summit cliff of the mountain. (Photo Simon Richardson)

On Saturday December 13 Roger Webb and I decided to gamble on the summit cliff of Beinn a’Mhuinidh in the Northern Highlands. We had stared at this NW-facing crag whilst descending Slioch on several occasions, and as far as we knew, nobody had ever visited it before. With a cliff base at 550m it is low-lying, but we were counting on it being blasted free of snow and fully frozen.

Our optimism was misplaced because as we approached the foot of the face through a snow storm the ground was still soft under our feet, and the cliff covered in snow and not as steep as we had hoped. Prospects looked bleak, so whilst Roger sorted the gear, I headed right to look at a steeper looking buttress that was just visible a long way to the right. From underneath I could see that it reared up into a steep headwall. This was excellent news as there would be little reliance on turf, but there was no obvious line and it looked extremely difficult. As I walked back to Roger, I looked back, and through the blowing snow there was a hint of a right-trending diagonal weakness. So perhaps there was a way?

We climbed easy snow and ice up the lower half of the buttress to reach the foot of the headwall. The rock was worryingly compact, there was no belay and failure looked increasingly likely. But sure enough,  a hidden gash cut deep into the crag, so I stamped out a platform in the snow and Roger set off up the gash that soon reared up into a steep chimney. Hopeful looking spikes turned out to be rounded and useless, so Roger continued up as we were blinded by yet another snowstorm. On the plus side, the turf was frozen.

But you should never give up when Scottish winter climbing. When the chimney tightened and steepened, Roger found a crucial cam placement that gave him the confidence to commit to the squeeze section above. After a brief struggle he moved up to a good ledge on the blunt crest of the buttress. When I came up I was concerned about the blank-looking wall above, but miraculously the rock changed at this point from completely unhelpful to cracked and featured. It had stopped snowing too. An excellent pitch linking grooves up the headwall led to easier ground, where Roger bounded along the final easy ridge to the top. All that was left to do was to bag the summit and then descend the long south-easterly slopes back to Incheril.